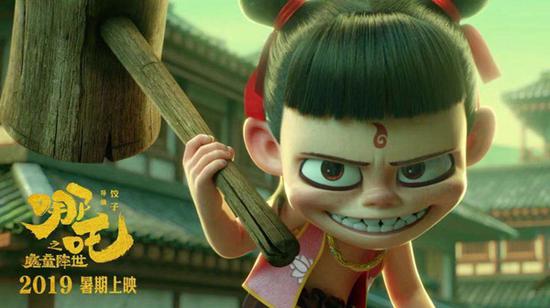 First Chinese IMAX animated film, "Ne Zha" is now number one on the list for highest-grossing animated film in the country.

Ne Zha, a Chinese mythical figure known for its rebellious spirit, is experiencing a huge boost of popularity following the runaway success of an animated movie featuring him as the main character.

Home-grown animation "Ne Zha" has beaten "Monkey King: Hero is Back" to take the crown of the highest-grossing domestically-made animated film on the Chinese mainland.

As the first Chinese IMAX animated film, "Ne Zha" had raked in more than 990 million yuan (about 143.7 million U.S. dollars) as of 3:30 p.m. Tuesday, the fifth day of its release, according to the China Movie Data Information Network.

It beat the record of about 956 million yuan held by China's home-grown "Monkey King: Hero is Back" in 2015 to top Chinese mainland box office in terms of domestic animation features.

The film tells a story of Ne Zha, who was a devil born into a loving family and eventually emerged as a hero. The mythical figure riding on the wind fire wheels often appears in some of the country's best-known works of classic literature, such as "Journey to the West."

Maoyan, a film database and ticketing platform, forecasted that the film's total box office in the Chinese mainland is expected to surpass 3 billion yuan, which would beat out the animated Disney film "Zootopia," the highest-grossing animation ever in the mainland market with 1.53 billion yuan.

"It is humorous and can cater to people young and old. And most of all, it is heart-touching," said Xiao Feng, a movie viewer.

Its box office success was a stark contrast to the cold shoulder it received after the release of its first two trailers, which raised questions and mockery for its presentation of "the ugliest version of Ne Zha."

"We designed more than 100 versions of Ne Zha," said the film's director Yang Yu, who also goes by the name Jiaozi. He added that it took two years to refine the script and three years for more than 1,600 staff to produce the film. Shots with special effects account for 80 percent of the total film.

This is not the first movie to have Ne Zha as the protagonist. In 1979, a milestone animation "Prince Nezha's Triumph Against Dragon King" was produced, becoming a childhood memory of many Chinese.

"Although Ne Zha is a mythical figure, he should carry various spiritual cores in different ages," Jiaozi said.

Compared with previous versions of Ne Zha, where he could never please his father and eventually commits suicide, Jiaozi's version has the courage to defy fate and break stereotypes, with the belief that Ne Zha can choose to be a demon or a god.

"In reality, many young people are breaking down outside limits and prejudices," Jiaozi said, adding that the movie's themes appear to be clicking with the young Chinese.

He selects Ne Zha from many Chinese mythical figures. "Humans are complex. You cannot judge a person with prejudice."

The movie has also resonated with Chinese viewers for realistically depicting the modern parent-child relationship.

"Ne Zha's parents are very typical Chinese parents, who express their love toward their children through action but seldom by words. This movie also teaches me that we should communicate more with our parents," said Tang Shiyuan, a university student.

Movie critic Zhang Shufan said, "'Ne Zha' is a top-quality Chinese home-grown animation in recent years, thanks to its mature screenwriting, amazing visual effect as well as a unique style of entertainment."