How Xinjiang's economy and society developed in the last 70 years 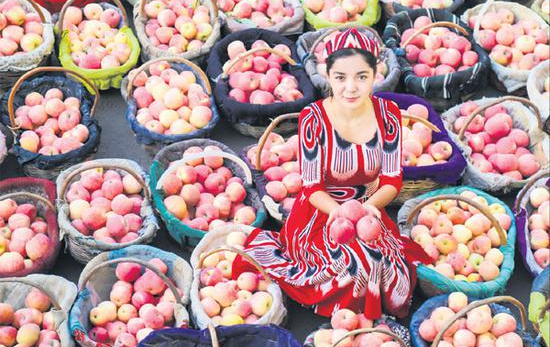 "Earth-shaking changes have taken place in Xinjiang, and the lives of people in all ethnic groups have greatly improved," the report said.

As the forefront of China's westward opening-up, Xinjiang's total imports and exports exceeded 20 billion U.S. dollars in 2018, said Shohrat Zakir, the Governor of the Xinjiang Uygur Autonomous Region in a press conference on Tuesday.

"The region leads the nation in agricultural mechanization and efficient water conservancy irrigation, and has become China's biggest cotton production base," said Zakir.

A great number of water conservancy, transport and energy projects have been completed, further improving the region's infrastructure. "With 21 civil airports, traveling in and out of Xinjiang by plane has become the first choice of many people," he added.

People of all ethnic groups mark historic improvement in livelihoods

Suitable and focused policies targeting poverty-stricken areas in the four prefectures of southern Xinjiang have also seen great results. From 2014 to 2018, 2.31 million people, including 1.89 million from southern Xinjiang were lifted from poverty. 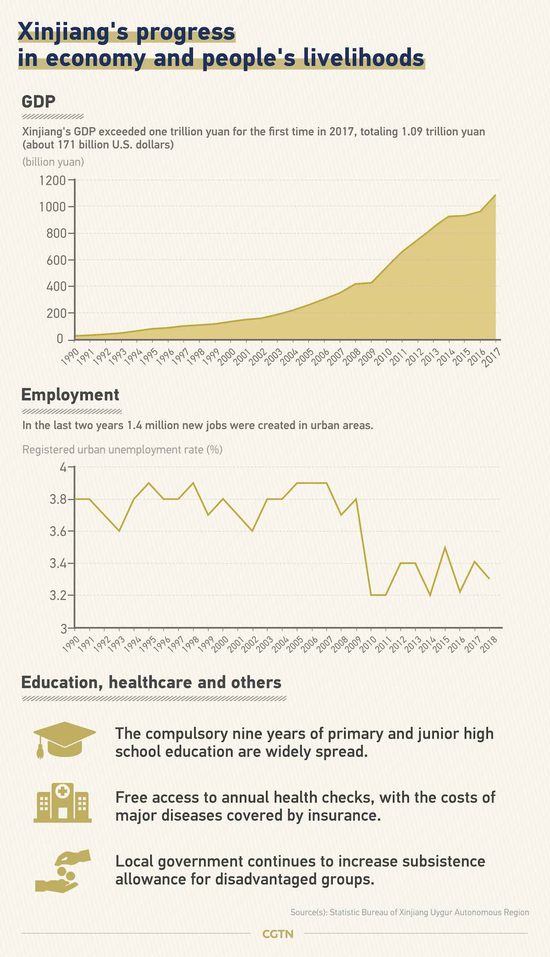 The government spent 69.59 million yuan to relieve poverty in Xinjiang from 2014 to 2018, with a stress on people and livelihood-centered development. More than 70 percent of the public budget expenditures in the region were spent on improving livelihoods and continuously boosting nine welfare programs focusing on employment, education, medical services and social insurance etc.

The infrastructure construction in Xinjiang also guaranteed a more convenient and higher-quality life from the residents in the region, the report said.

Xinjiang's net enrolment ratio of school-age children used to be less than 20 percent, and the illiteracy rate was up to 90 percent and per capita life expectancy was merely 30 years.

After 70 years of development, the number of primary schools increased from 1,335 in 1949 to 3,368 in 2018, and high schools from nine in 1949 to 1,278 in 2018, said the report. The region has also “continuously improved the equalization of basic public cultural services, protected cultural heritage and driven the development of ethnic cultures.”

The prosperity and progress of Xinjiang cannot be separated from the great support of the central government and the selfless help of all Chinese, said the report.

The data shows that from the establishment of the People's Republic of China, the central government has provided 2.35 trillion yuan, including 1.61 trillion yuan alone from 2012 to 2018 as financial subsidies to Xinjiang. And since 1997, a total of 15,975 cadres have been sent to aid the autonomous region.