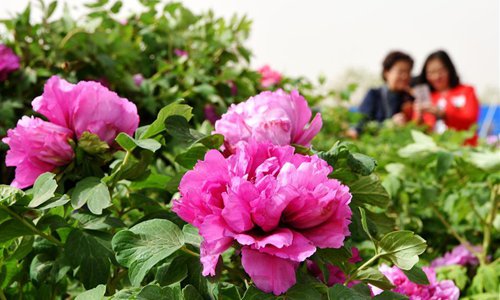 Ninety percent of participants in an online poll said they agree that the peony should be China's national flower, organizers of the poll said Wednesday.

The poll was conducted from Monday to Friday by the China Flower Association (CFA), an organization under China's National Forestry and Grassland Administration.

"According to data we have received, more than 90 percent support peony as China's national flower," a staff of the association who requested anonymity told the Global Times on Wednesday.

The staff said it's time to set the national flower for China as this year marks the 70th anniversary of the founding of the People's Republic of China, and people are getting happier and wealthier.

Native to China, the peony has a history of more than 4,000 years. The flower is seen as a symbol of harmony and prosperity, and was the national flower during the Tang Dynasty (618-907), CFA said on its website.

The online poll has two options for voters. If they disagree, they could choose one out of nine other flowers such as plum blossom, orchid, chrysanthemum, and lotus.

The four flowers have different connotations in the context of Chinese culture. For instance, the lotus represents innocence and purity while the plum blossom depicts persistency and nobility. The orchid symbolizes gentleness and loyalty while a chrysanthemum is a symbol of integrity and good health.

"After the final result comes out, we will report to the State Council and wait for the final decision from the National People's Congress… and hopefully this is finished before National Day on October 1," the staff told the Global Times.

The topic quickly became a hit on China's Twitter-like Sina Weibo. Many net users said they were surprised as they thought the peony was already the national flower for years.

A few net users want to have more than one national flower for China as the country is too big to be represented by one kind of flower.

However, 466,000 people, or 82 percent on a separate online poll by the National Business Daily on Tuesday said they think one national flower is enough.

Experts believe that one national flower is better. For many years, during   China's National Day ceremony or international conference, such as APEC and the G20 held in China, the backdrops were decorated with peony, the CFA staff noted.

CFA said on its website that the national flower should be a domestic flower with a long planting history and beautiful appearance, reflect Chinese culture and characteristics, have high ecological, economic and social benefits and be popular among the people.

Those rules were established by experts after several discussions, as a national flower is not as simple as people's personal preference, but the symbol of China and Chinese culture, the staff said.

He noted that the experts, coming from diverse backgrounds including floriculture, society, history and culture, all agree on peony as China's national flower.

He added that a nationwide activity to select a national flower was launched in 1994 and peony was unanimously chosen. But the plan did not work out for various reasons.