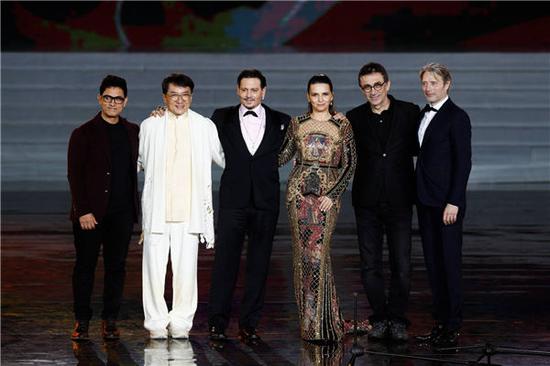 With a bunch of top international stars in attendance, the recently concluded Hainan International Film Festival has gripped the rest of the world.

Its masterclasses, which ran from Friday to Sunday, were arguably the biggest highlight of the weeklong event, where A-list celebrities such as Johnny Depp, Juliette Binoche, Nuri Bilge Ceylan, Aamir Khan and Isabelle Huppert imparted their wisdom to a gripped audience.

Award-winning Turkish director Ceylan opened the program and shared his experience and tips on filmmaking.

Born in Istanbul in 1959, Ceylan shot to fame with his directorial debut, Cocoon, the first Turkish short film to be selected in a competition section of the Cannes Film Festival.

However, it is a string of his following films－especially the Palme d'Or winner, Winter Sleep (2014)－that have established his reputation as a master of Turkish cinema.

"For me, filmmaking is like an investigation; an examination of myself and the people I've known very well," says Ceylan during his masterclass.

Most of Ceylan's films employ a small crew, with the actors comprising mainly friends or relatives. His films are reviewed as being full of poetic depictions that arouse deep thoughts about Turkey and its people.

But even for an internationally acclaimed filmmaking master, Ceylan says it still feels painful to launch a new film, and the most challenging parts are writing the script and the shooting.

"People usually say filmmaking is a collaboration, but I always feel lonely because nobody understands my creative vision like I do," he says.

Feeling isolated from the rest of the production, whether in the limelight, or behind the scenes, is probably a shared anxiety.

Arriving around 4 am at Sanya airport on Saturday, Depp－who wore a pair of sunglasses and looked a bit tired－followed Ceylan, to open up on his joys and fears in a candid retrospective of his 30-year acting career.

As one of the highest-paid superstars in Hollywood, Depp is familiar to Chinese fans for his role as Jack Sparrow in the Pirates of the Caribbean films. He recently impressed local audiences as the titular dark wizard in David Yates' blockbuster Fantastic Beasts: The Crimes of Grindelwald.

However, the star says in contrast to his often flamboyant and eccentric film roles, he is actually a shy and introverted person in real life.

"For me, the safety in being captain Jack Sparrow is already an answer for everything," says the 55-year-old actor.

An emotional Depp asks: "How many years have I said other ones' lines more than I have said my own things?"

He started out playing the guitar at age 12 and Depp recalls that when he first went to Hollywood in the early 1980s, it was in the pursuit of his dream of being a rock star. He stumbled onto his path as an actor quite by accident.

Speaking about his first role in the 1984 horror film A Nightmare on Elm Street, he felt he was silly and ignorant about how films were made.

To polish his performance, Depp purchased books and attended acting classes, but it did not work. He realized that observing the people around him was the best way to learn how to portray diverse personalities and the different way people talk and move.

"One of my favorite things in the world is watching people. Human beings are fascinating creatures. To observe them is probably one of the most interesting things to do on earth," says Depp.

Maverick director Tim Burton is probably one of the most important figures in Depp's career, paving his way to the highest echelons of Hollywood's acting elite.

It was Burton's dark romantic fantasy film, Edward Scissorhands (1990), which nabbed a nomination for best actor at the Golden Globes for Depp. The pair has teamed up several times since, notably in the musical adventure film Charlie and the Chocolate Factory (2005) and the fantasy film Alice in Wonderland (2010), both of which won a lot of acclaim.

Recalling his first meeting with Burton, Depp says they were both really shy at first, and they ended up drinking eight cups of coffee during the conversation that lasted around three hours.

An old friend of Depp who once co-starred with him in the romantic drama Chocolate (2000)－which was nominated for five Oscars and four Golden Globes－French actress, Juliette Binoche reveals that performance naturally became part of her life when she was still a teenage student.

For Binoche and her fellow actress, Isabelle Huppert－who is the most nominated actress for the Cesar Award with 16, and has won two for best actress－acting seems like a gift they were born with.

While Huppert teasingly claims that she is actually a lazy actress who only reads a script once, Binoche recalls she realized how to perform authentically at age 18, and has not needed to demonstrate much to prove that she is an actress since.

Similarly, throughout their careers, both of the veteran French actresses have shown huge interest in arthouse films.

"You can't entertain people and also make them think or fear," says Huppert.

To better understand the pearls of wisdom shared with those who were lucky enough to attend the feast of celebrity masterclasses, there were also 100 excellent films from more than 30 countries and regions that were screened as a part of the festival, which ran from Dec 10 to Monday.