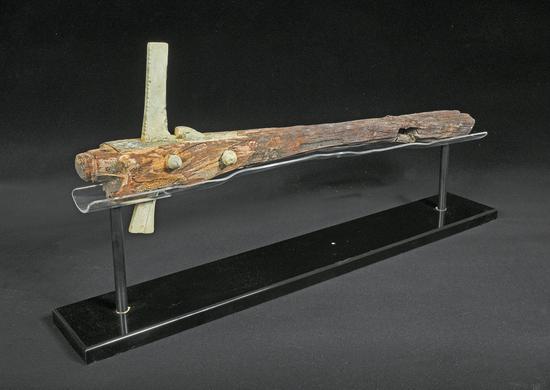 The crossbow developed during the Han dynasty was so powerful it revolutionized warfare in early China. (Photo provided by Cheffins Auction House)

Chinese artifacts, including a 2,000-year-old crossbow, a snake-shaped oil lamp from the Han Dynasty (206 BC-220 AD), and a Zhou Dynasty (c. 11th century-256 BC) bronze bell, are set to go under the hammer at an auction in the United Kingdom city of Cambridge.

Cheffins Auction House estimates the three items could fetch more than a combined 260,000 pounds ($342,000) and says there is a strong demand for such items.

"The market for historical Asian artifacts is booming as they become the next must-have item for wealthy Asian collectors," said Philippe Smolarski, head of Asian art at Cheffins."Previously, the majority of buyers for these pieces were the Chinese super rich, however there has been a tangible increase in the number of purchasers looking to buy back a part of the country's heritage, which has led to prices rocketing even for the most mundane items."

In April, a 3,000-year-old Chinese bronze vessel fetched 410,000 pounds at a UK auction, which was twice its estimated price. The sale was denounced by China's National Cultural Heritage Administration because the Zhou Dynasty relic was thought to have been looted from a palace in Beijing by a British soldier in 1860.

Cheffins values the crossbow at between 15,000 and 20,000 pounds. The specimen is a rare find because its wooden body has survived intact along with the bronze trigger mechanism.

"Early bronze examples of crossbow mechanisms from ancient China do come to the market on occasion, however one such as this with the mechanism still intact within the wooden arm of the bow is a completely unique piece," said Smolarski.

The crossbow is owned by a collector from Hong Kong, who bought it from a private collection in Taiwan. 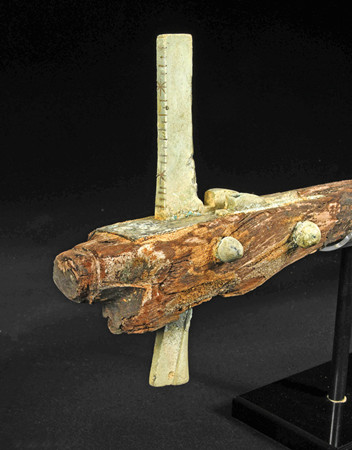 The crossbow developed during the Han dynasty was so powerful it revolutionized warfare in early China. (Photo provided by Cheffins Auction House)

Crossbows are thought to have been invented around 2,600 years ago in China. The technological advancement was so significant that it altered the course of the country's early history.

The type of crossbow being sold at auction was accurate up to a range of 260 meters. By comparison, the AK 47 assault rifle has an effective range of 350 meters. The crossbow corps of the Han Dynasty was so lethal that it was largely credited with the dominance of the state at that time.

Cheffins estimates the oil lamp is worth between 80,000 and 120,000 pounds. The lamp is made of bronze forged in the shape of a coiled snake. It is thought to be the only known surviving specimen of its kind, according to Smolarski, who says Han Dynasty lamps were more commonly made to resemble goose feet. The item was consigned from a Hong Kong-based collector.

The bronze bell dates back to around 500 BC and Cheffins values it at between 80,000 and 120,000 pounds. The instrument would have been played in orchestras during banquets and courtly events. Similar bells have been found in the tombs of high-ranking officials of the Zhou Dynasty.

The three items and a number of other Asian artifacts will go up for sale on Nov. 8.