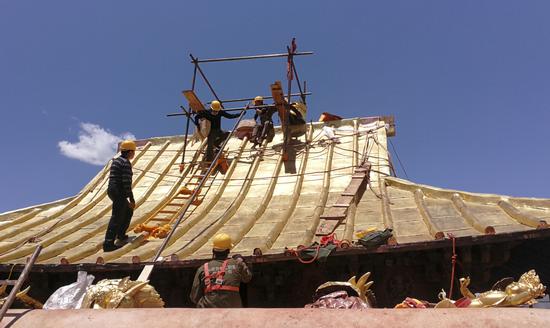 Renovation of the golden roof of the Potala Palace is nearly complete and is awaiting inspection by the National Cultural Heritage Administration, said the Potala Palace Management Office in the Tibet autonomous region on Wednesday.

The government has been making a significant effort to preserve Tibet's cultural relics over the past few decades, including the palace, one of three UNESCO World Heritage sites in the region.

With a history of more than 1,300 years, the Potala Palace is an invaluable asset that enriches Tibet's history, culture, art and religion.

The historical palace underwent two major renovations by the central government from 1989 to 2009 during which more than 200 million yuan ($29 million) was invested.

Not only does the site receive support for renovation from the central government, but it also continues to receive renovation and preservation assistance from the regional government and the palace's management office, said Jordan, deputy head of the office.

The latest renovation of the roof was launched in April.

"More than 31 million yuan was spent during the recent renovation," said Jordan.

The renovated roof also has seven victory banners and four roof ornaments along its edge.

"The surface of the reliquary stupas was eroded by rainwater, and the color of the gold plating has faded over time," said Tashi Phuntsok, head of the office's renovation department.

Phuntsok also said renovation is necessary since wooden portions of the roof are compromised from rot, pests and other natural causes.

Prior to the launch of the renovation project, the office conducted a bidding process to recruit a leading construction team to carry out the challenging work. The tender was won by Tibet Chakpori Handicrafts Bronze Arts Co Ltd, a local company specializing in the production of Buddhist sculptures and monastery renovations.

Dophuk Tsang Tsega, head of the company, said 75 kilograms of gold was used in the renovation of the golden roof.

Tsega, who is the head of the region's sculpture art association, is originally from the Dophuk Tsang family, which has a rich cultural background, producing many Buddhist masters and craftsmen.

The palace office has a renovation department that is responsible for daily preservation and maintenance work.

First built in the seventh century by Tibet's 33rd king Songtsen Gampo, and expanded by the fifth Dalai Lama Ngakwang Losang Gyatso and his minister Desi Sangye Gyatso in the 17th century, the Potala Palace was used as the residence, administrative office and religious ritual sites of successive Dalai Lamas.

To better preserve the palace's architecture, the office allows a maximum of 5,000 visitors each day.