Three harvests step toward commercial use for seawater rice 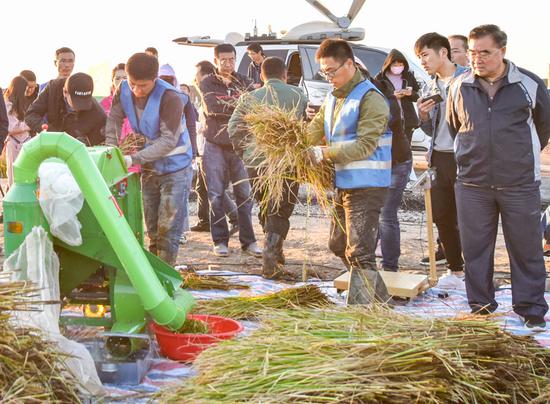 Researchers put ears of rice into a thresher to calculate the yield of seawater rice in Qingdao, Shandong province, on Wednesday. (Photo/China Daily)

Three experimental fields of seawater rice were harvested in China on Wednesday, a further step toward its future commercial viability.

Also known as saline-alkali tolerant rice, seawater rice is designed to grow in tidal flats or other areas with heavy salt content and has been developed by plant-breeding experts through crossbreeding and other technologies.

Zhang Guodong, executive deputy director of the Qingdao Saline-Alkali Tolerant Rice Research and Development Center, said the yield was from big paddies and could be improved.

"Once widely planted on a large scale, the yield could be much higher," he said.

It set itself a three-year target of developing a salt-resistant rice strain capable of yielding 4.5 tons a hectare, which guarantees growers the minimum acceptable level of profit. The average rice yield in China is 6.75 tons a hectare.

The sites represent virtually every type of saline-alkali land in China and researchers aim to cultivate different strains able to cope with different climate, salinity and soil structure conditions.

The test crops in Kashgar and Daqing were also harvested on Wednesday.

In Kashgar, the yield reached more than 7.5 tons per hectare, according to experts' tests, much higher than expected.

Zhang said the harvest in Kashgar was satisfactory. "The result means it is possible to plant such salt-resistant rice in southern Xinjiang in the future," he said.

Wu Zhanyong, an official from the Qingdao center, said, "Xinjiang has about 2 million hectares of saline-alkali land that have the potential to be planted with salt-resistant rice, and if it is widely planted it will substantially improve rice production in the region."

The seawater rice strain grown in Daqing only yielded 3.1 tons per hectare. A live video clip on Shandong TV showed growers appearing a little disappointed by the result, as they hoped the experts' endeavor would boost production.

Mu Ping, a professor from Qingdao Agricultural University who has worked in Daqing for months, said the water and soil conditions at the site were not ideal, and the pH level was extremely high.