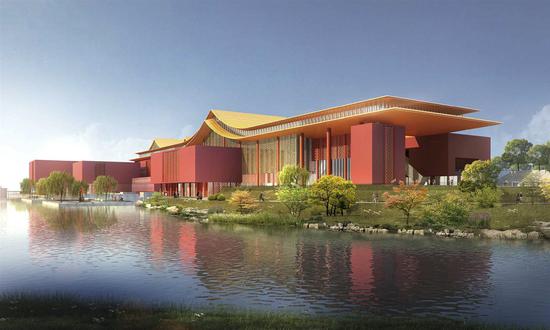 A computer-generated graphic shows the design of the Palace Museum branch. (PHOTO/CHINA DAILY)

After years of preparation, construction of a branch of the Palace Museum formally kicked off on Wednesday in Beijing's northwestern outskirts.

The branch, covering 62 hectares in the north of Haidian district, will serve as satellite institution of the complex that was China's imperial palace from 1420 to 1911, also known as the Forbidden City.

The branch will include 35,000 square meters of exhibition space, a conservation center for cultural relics of 20,000 sq m and a warehouse of 23,000 sq m, according to Shan Jixiang, director of the Palace Museum.

Plans call for it to fully open in June 2022, but the conservation center may be ready for visits by the public in 2020, when 600th birthday of the Forbidden City falls, Shan said.

"Having such an institution will improve our service and expand our room to display our collections," he said. The lack of sufficient exhibition space has been a lingering problem for the museum, which houses about 1.86 million cultural relics.

The need to provide a safe and secure environment for artifacts exhibited in the ancient buildings has meant that only 2 percent of the museum's treasures can be simultaneously displayed to the public.

"Our collections of large items, like the huge number of tapestries and sedan chairs, particularly need exhibition spaces," Shan said. "It's currently impossible to display them in the Forbidden City, but the new museum will offer good conditions to put them on display."

The director said the new museum will also become a hub for studying the horticulture of the imperial age. Plants grown there will be taken to the Forbidden City in downtown Beijing for display.

"Sometimes, it's difficult to breed some plants downtown because of the urban heat," he said. "It's better to do so in the outskirts."

The new complex will be also used to preserve and pass along expertise in the renovation of ancient architecture and traditional craftsmanship. Skilled craftsmen who are inheritors of intangible cultural heritage will join in renovation of cultural relics to revive old techniques.

There are many reasons for the location for the new museum. "This choice is to respect history," Shan said.

"During imperial years, when the royal family needed more space for palaces or resorts, they tended to choose a new area in northwestern Beijing, as in the case of the Summer Palace."

The new site also holds the remains of an old porcelain kiln. The kiln, which was used for items for the royalty, will become another attraction.

The new building's design was chosen from five final entries, based on the judgment of scholars and public input, Shan said. The museum administration opposed any "maverick" plan from overseas studios and invited domestic talent to submit proposals.

The architectural plan selected is from a team led by Zhang Yu with the Beijing Institute of Architectural Design.

Red and yellow－two colors that were often used by royalty in the Forbidden City－are featured in the new complex. The eco-friendly and energy-saving construction also is designed to match the surrounding natural environment.

Wang Ning, deputy mayor, said the museum "can be a hub for cross-border cultural communication and thus help our goal of making Beijing a global city".