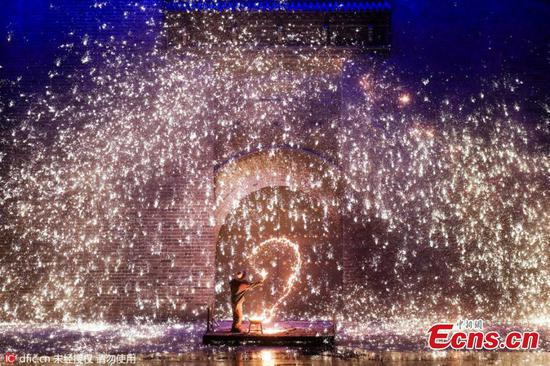 The Chinese TV series "Story of Yanxi Palace" has become a trend among Chinese viewers. In the 32 episode, noble consort Gao, one of the women that Emperor Qianlong loves, wants to present a breath-taking show for Qianlong's mother to celebrate her birthday.

The show in the TV series is called "Wan Zi Qian Hong," which means "a blaze of color." The original show is called "Dashuhua," or molten iron throwing, not only can be seen in TV series, but also in Zhangjiakou City, Hebei Province near Beijing.

"Dashuhua," which has a history of 500 years, has been listed as an intangible cultural heritage in Hebei Province. The most recognized one now is in Nuanquan.

Many blacksmiths couldn't afford fireworks in ancient Nuanquan, while the rich around them could easily celebrate the Chinese Spring Festival or Lantern Festival via setting off fireworks.

However, those blacksmiths were inspired by the sparks of the iron, they poured molten iron on the brick walls above the castle gates, and when it bounced back, it looked like splendid fireworks.

With the super exciting atmosphere, the arresting "fireworks" created by blacksmith attracted many local folks who couldn't afford real fireworks, to watch it, developing the tradition that during the Spring Festival or Lantern Festival, the rich celebrate the festivals via fireworks while the regular folks celebrate it by "Dashuhua" until today.

In the early beginning, "Dashuhua" was taken place on a castle wall in Nuanquan, however, with the number of viewers getting more and more, people there built a large square to hold it.

The main characters of "Dashuhua" show are three masters who are over 40 years old, wearing straw hats and wearing sheepskin coats inside out.

When the hot liquid iron melts the night before is poured into the pot in front of the wall, a master picking a wooden spoon comes in, as long as the white spoon in his hand reaches into the molten iron, the liquid spring up immediately.

As a master pours a spoonful of liquid iron with more than 1,600 degrees Celsius over the wall, the pearly golden and red drops burst into a shower of golden sparks, like little umbrellas, making the viewers marvel at the amazing scenery.

To make it more spectacular, masters usually pour the hot liquid one by one to save their energy to present it further for the viewers.

If you believe it is an easy performance, then you might change your mind when you know how it is prepared.

The collected waste irons weigh more than 500 kilograms and they must be melt in a furnace for half an hour with the strong fire, and the wooden spoon made of willow roots should be immersed in water for days and then dried by light fire to make it strong enough not to be burned.

The show has high requirements on the master's arm strength, skills, and great courage as well, for a green hand, it is easy to be burned.

The show today in Nuanquan is always accompanied by many folk performances like singing, lantern dance, paper-cutting, etc., but for the artists, the most critical section is to worship the furnace before a performance, as they put it that respect should always come first.