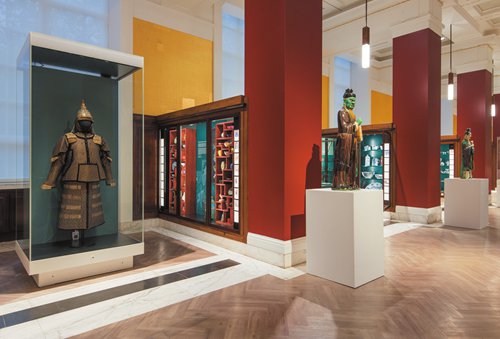 The British Museum has one of the largest collections of Chinese historical artifacts in the Western world. But how those items are presented can have a huge impact on visitors' understanding of the country.

To ensure the best visitor experience possible, the museum's Sir Joseph Hotung Gallery of China and South Asia recently underwent a full renovation. The new gallery fully opened to the public on December 14, more than a month after Queen Elizabeth II oversaw a more limited opening back in November. The display includes a new narrative that brings the stories of the two regions up to present day.

The new gallery introduces new items such as paintings, prints and textiles that need to be displayed in a carefully controlled environment so avoid damage. With the gallery's new lighting and design, the display takes visitors through the fascinating history of a major portion of the globe.

Hartwig Fischer, director of the British Museum, told the Global Times, "The newly refurbished gallery is a more comprehensive and complete display of our Chinese collections," adding that while there are fewer objects on display, the variety is far greater than before.

"It's much more balanced and representative," he added.

This newly refurbished gallery presents the history of China from 5000 BC to the present.

A set of magnificent Ming Dynasty (1368-1644) dragon tiles are the first exhibit that visitors see when they enter the gallery.

These beautiful, large, high-relief tiles were made in sets to form a series of friezes showing blue-and-yellow dragons entwined among lotus flowers. For many years, these dragons were part of a garden screen that originally ran along the ridge of a building in Shanxi Province, supposedly protecting it from fire, as dragons in China have a close relationship with water.

The China gallery is divided into 16 bays that explore Chinese history through its material culture.

The items on display, such as jades, silk and porcelain wares are of exceptionally high quality and are shown along with introductions that place them in the proper historical context.

With the improved environmental controls in the gallery, Chinese calligraphy and painting works will now be able to be displayed as part of rotating displays. Currently, the spectacular modern work of the experimental calligrapher Gu Gan can be appreciated alongside the earliest Chinese scroll to reach Britain, which arrived at the end of the 1700s.

"The refurbishment will allow us to include other material from the collection and bring the story of China and South Asia up to the present day. Understanding Asia is crucial for all our futures and this gallery will help visitors to better understand the long and significant history of these regions," Fischer said.

"The new display mixes things up from the same eras. For example you got jade and pottery from the early periods," Jessica Harrison Hall, curator of Chinese ceramics at the British Museum, told the Global Times.

She said that by arranging displays on a time line rather than by type of material, the new display makes for a much more visually exciting exhibition.

"The new narrative's intent is to give the visitors a flavor, exciting their interest to discover more about different periods," she added. 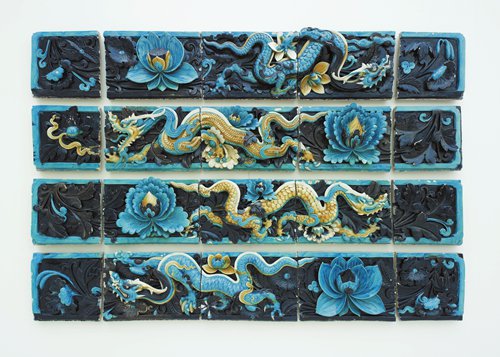 While the previous gallery at the museum only took visitors up to 18th century China, the new gallery covers the nation's history right up to the present day.

"It is absolutely crucial to learn about modern China and the extraordinary development of China," Fischer told the Global Times.

"It's not some ancient culture. It's alive and it's here today, and it's an incredibly creative place. How could we do a new gallery about China without bringing it right up to the present day?"

In the contemporary display bay, there is a huge ceramic butterfly robe covered in over 10,000 porcelain butterflies, each of which were handmade by craftsmen in Jingdezhen, the capital of porcelain-making for more than 1,000 years. Butterflies symbolise happiness and longevity and are associated with the Daoist conundrum of whether or not life is an illusion.

Another interesting object in this bay is the Phantom Landscape, a painting about the urbanization of traditional rural life in China. At first glance, it looks like a Southern Song Dynasty (1127-1279) landscape painting, but on closer inspection the signs of modern urban life such as electric cables and pylons can be seen.

Hall explained that the British Museum would continue its long tradition of collecting contemporary works and objects that illustrate the material culture of the Chinese-speaking world. The objects in the contemporary display area will change every six months.

"One of the challenges for the gallery is how do you sum up several hundreds of years in a small space. In one sense, you can't. You can't possibly tell the whole story of one or two centuries in some space the same size as a wardrobe. It's impossible. But you can pick out a few interesting stories," Hall said, noting that the current collections in the Qing Dynasty (1644-1911) bay illustrate the interactions between China and the West.

From 1644 to 1830, China was idealized in Europe, and Chinese goods were regarded as the epitome of luxury. This Western desire for chinoiserie embraced the visual cultures of China. The counterbalance was euroiserie, a taste for all things European in China.

The objects on display - watches made in Europe for China and carved fans and ivories made in China for Europe - illustrate the Qing Dynasty's maritime trade with Europe.