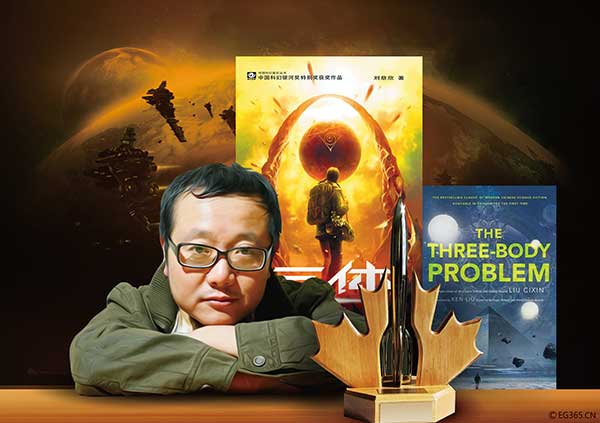 The English edition of the first book of the trilogy - The Three-Body Problem - translated by Chinese-American sci-fi writer Ken Liu (unrelated to the author) in 2014, sold more than 100,000 copies worldwide, according to Liu Cixin.

Last year, that book also won Liu a Hugo Award, which is an annual global honor given to sci-fi and fantasy works.

But even so, Liu, 53, says sci-fi as a genre isn't mainstream in China.

"Readers of sci-fi novels in the country are still in a minority. That hasn't changed despite my winning. I'm talking about facts here, not showing my modesty."

While The Three-Body Problem has sold way more copies than other translated Chinese novels in the recent past, the numbers of new sci-fi books printed in China each year are on an average less than 10 percent of those in the United States.

That's also a reason why noir films such as 2001: A Space Odyssey, The Matrix, Gravity or Interstellar are made in Hollywood.

The sales of his novels outside the trilogy and books by his Chinese peers haven't risen either, says Liu.

Even his wife and daughter are not readers of his works, he jokes.

Besides, there are only a handful of known sci-fi writers in the country.

But by winning a top international award, Liu has debunked the theory that Chinese sci-fi writers lack imagination.

"The readership will mature in time and so will the market (in China)," says Liu, holding out hope.

Italian scientist and writer Giulio Prisco, who has read The Three-Body Problem in English, describes the book as a classic and "vintage space opera".

"Chinese writers are taking the lead in bold, imaginative science fiction (that is) able to ignite minds and energize whole generations," Prisco says.