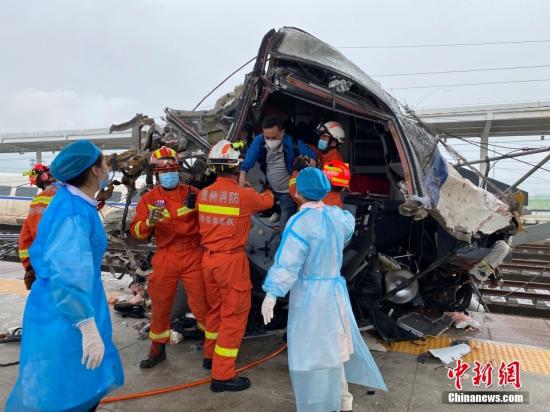 Rescuers work in the accident site where a high-speed train derailed due to a mudslide in southwest China's Guizhou Province on June 4, 2022. (Photo/ Provided to Chinanews.com)

(ECNS) -- A high-speed train derailed in southwest China's Guizhou Province on Saturday due to a mudslide, killing the driver and injuring an attendant and seven passengers, the China Railway Chengdu Group Co. said on Saturday.

The seventh and eighth carriages of Train D2809, from Guiyang City of Guizhou Province to Guangzhou City of Guangdong Province, derailed at around 10:30 a.m. near a station in Rongjiang County.

The injured have been sent to hospitals and all the other 136 passengers have been safely evacuated, the statement said.