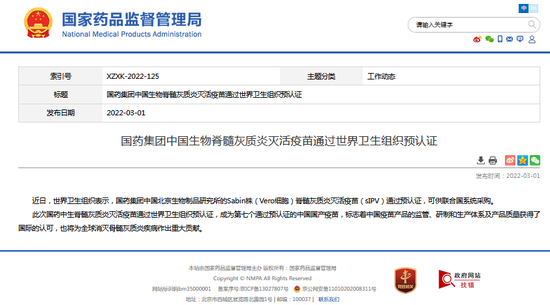 (ECNS) -- China's National Medical Products Administration on Tuesday announced that the country's Sabin Inactivated Poliovirus Vaccine (Vero Cell) developed by Sinopharm has won the prequalification of the World Health Organization (WHO) and will be officially included in the drug procurement catalogue of United Nations (UN) agencies.

It is the seventh China-made vaccine that has passed WHO prequalification, indicating that China has gained international recognition in vaccine supervision, development and production system and quality, and will make significant contributions to the global eradication of poliomyelitis.