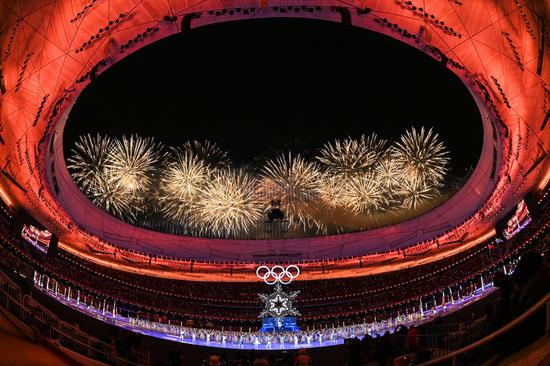 Fireworks illuminate the night sky during the closing ceremony of the Beijing 2022 Olympic Winter Games at the National Stadium in Beijing, Feb. 20, 2022. (Photo/Xinhua)

At the beginning of the closing ceremony, children holding snowflake-style lanterns lit up the Chinese character "Dong", or winter in English, in line with the Lantern Festival tradition.

The huge Chinese knot at the closing ceremony was also eye-catching. It is a symbol of luck and unity as well as a reflection of Chinese philosophy. Each ribbon forming the Chinese knot can be tied independently, while many ribbons can also be woven together, showing China's respect for other cultures and values.

Chinese Zodiac patterns were incorporated into the design of giant skating boots for participating children.

A total of 365 common people holding willow twigs to bid farewell to the Games proved another highlight of the ceremony. In ancient China, a host often gives a willow twig to relatives and friends who will travel far away to show his or her reluctance to see them leave.

The Beginning of Spring, the first of the 24 Solar Terms, was selected as the starting point of the Beijing 2022 Winter Olympic Opening Ceremony, as it is believed the extreme cold brings about new life.

What's more, Chinese elements are seen everywhere inside and outside Winter Games stadiums. For example, the design of Big Air Shougang’s curves incorporated elements from the “flying apsaras” ribbon in the Dunhuang murals. National Sliding Center was dubbed "Flying Snow Dragon" due its zigzag design.

Athletes at Beijing Olympic Village didnot only enjoy unique Chinese food but also tried other Spring Festival traditions like pasting couplets since the Winter Games was held during this traditional Chinese festival.

One of the mascots of Beijng 2022, Bing DwenDwen, represented the image of Chinese panda, expressing the friendship and kindness of Chinese people.

Themed "Together for a shared future", the Beijing Winter Olympics was a bridge to enable the world to learn about Chinese culture and promote the communications between China and the world.