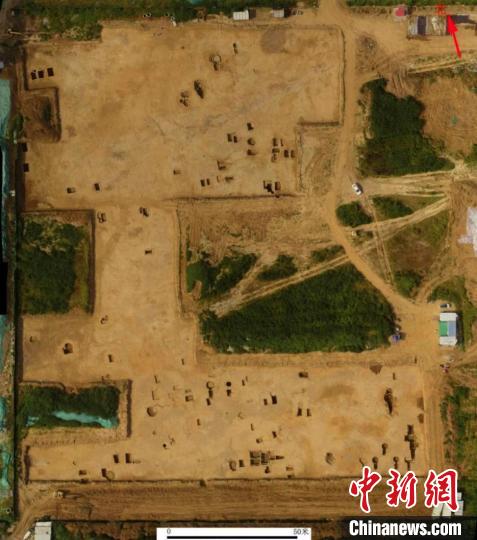 (ECNS) -- A total of 84 ancient Chinese tombs from the Warring States period (475-221 BCE) to the Qing dynasty (1644-1911) were found in Jinan, Shandong Province, among which there are more than 110 complete and recoverable artifacts, including a rare yellow-green glazed lamp with a lotus seated on the back of a lion.

Located in the east of Jinan, it is estimated that the group of tombs cover an area of at least 30 thousand square meters. Cultural relics like pottery, kettles, porcelain bowls, and pots have been unearthed thus far.

Fifteen Song and Yuan dynasty (10th to 14th century) tombs were found with less funerary objects like porcelain bowls, pots, among which the yellow-green glazed lamp is vey eye-catching, according to Fang Zhen, manager of excavation.

The lamp is 34.5 centimeters high, which is relatively big for the same type of ceramics according to previous data. The lamp, which is rather exquisite and vivid in detail, is a delicacy of colored glazed porcelains from the Song and Yuan dynasties, said Fang.

There are also 13 late Warring States tombs that are likely the earliest brick tombs found in China so far.

These tombs should belong to ordinary civilians for they are small and medium in size with few funerary objects, according to Fang.

The discovery provides significant information for studying Qi State of the late Warring States period, including the regional characteristics of the country's culture, situation of its border cities, its burial customs, etc, said Fang.