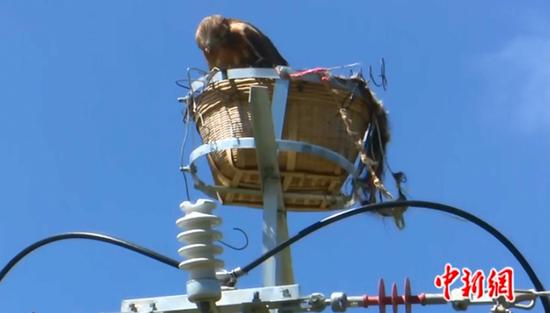 An artificial nest is seen on a power pole at the Longbao National Nature Reserve in northwest China's Qinghai Province. (Photo/Video screenshot from CNSTV)

The reserve in the province's Yushu Tibetan Autonomous Prefecture also hosts the core conservation area for Sanjiangyuan National Park, also known as Three-River-Source National Park, home to the headwaters of the Yangtze, Yellow and Lancang rivers. More than 61 species of birds inhabit the area and some have died as a result of electricity lines.

The subsidiary of the State Grid in Yushu originally installed 3,000 devices in 2017 to scare away the birds, but with little effect. Then in 2018, it changed tack, placing artificial nests instead to help birds better adapt to the infrastructure.

Pan Bochao, head of maintenance at the subsidiary, said the man-made nests, which have been installed in areas with increased bird activity, are 40 cm in diameter at their bottom and 60 cm at their top, and 50 cm in height.

A study of 200 of the nests showed 75 reported signs of birds having made nests on or be perching on them, while 14 had become home to a total 32 baby birds.

More than 1,200 such artificial nests have been built so far in Yushu, reducing the number of power-incurred bird deaths per km to less than one. Power cuts caused by birds in the area have also been reduced from 36.5 percent to 7 percent。