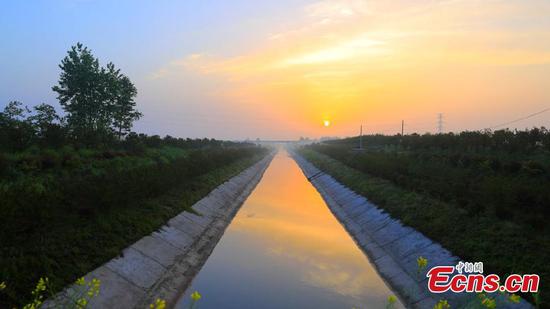 The 69th International Executive Council Meeting of the ICID, held in Saskatoon, Canada, approved the inclusion into the WHIS and presented a plaque to Chinese representatives.

Baiqi Canal, also known as Changqu Canal, starts in Xiejiatai Village of Nanzhang County in the west and ends at Hanjiang River in Yicheng City in the east, covering a total length of 49.3 kilometers.

The irrigation system was initially built in 279 BC. In attacking the Chu State capital, general Bai Qi of the the Warring States period (475 BC-221 BC) built the canal to surround the city with water for military purposes. Later, it was changed into a canal to divert water and irrigate 20,000 hectares of field along the line.

The ICID, established in 1950, is a leading scientific, technical, international not-for-profit, non-governmental organization.

Another three projects inscribed on the list are Dujiangyan in Sichuan Province, Lingqu Canal in Guangxi Zhuang Autonomous Region, and the Jiangxiyan weir system in Zhejiang Province.

So far, 13 water conservancy projects in China have been recognized as World Heritage Irrigation Structures.