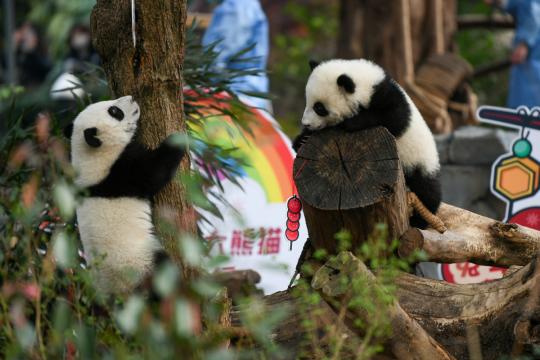 Two baby pandas are seen at the China Conservation and Research Center for the Giant Panda in Chengdu, Sichuan province, on Dec 29, 2022. (Photo/Xinhua)

Thirteen pandas were bred at the China Conservation and Research Center for the Giant Panda in Chengdu, Sichuan province, last year.

Since June, the center has provided the pandas with 24-hour care, including consistent on-site and video monitoring.

Li Dehong, a keeper at the center, told the China Central Television that most panda mothers who give birth to twins often only care for one baby because of their weakened condition after pregnancy. As a result, the other baby is often ignored, so the keepers take care of it.

Many of a baby panda's organs are developed in vitro. For example, it takes about 40 days for babies to develop vision and two months for them to start hearing, Li said.

The number of captive pandas worldwide has increased to 673, nearly double the number 10 years ago, according to the center.