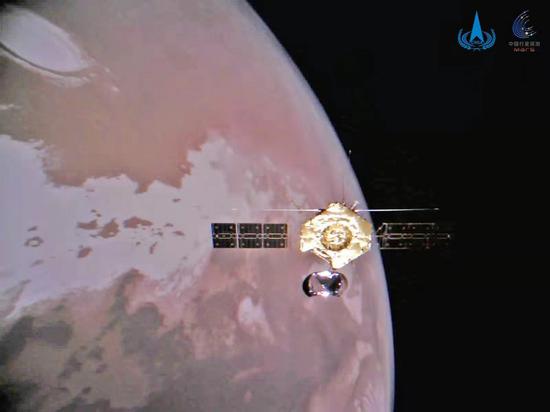 China's Tianwen-1 mission, consisting of an orbiter, a lander and a rover, was launched on July 23, 2020. (CNSA/Handout via Xinhua)

China issued an action statement on Monday outlining its plan for promoting further international cooperation on space technology and exploration, working with other countries and international organizations within the framework of the United Nations.

The document was issued at the 2022 United Nations/China 2nd Global Partnership Workshop on Space Exploration and Innovation, which started Monday in Haikou, capital city of the southern island province of Hainan.

According to the action statement, China is willing to work with space agencies and international organizations worldwide to promote the establishment of a new type of global partnership in space exploration and innovation featuring equality and mutual benefit, openness and inclusiveness, peaceful use and the benefit of mankind.

Zhang Kejian, head of the CNSA, noted in his keynote speech the significance of continuous efforts, innovation and adhering to peaceful use and sustainable development in space exploration.

Zhang said that China is willing to work with space agencies and international organizations around the world to promote the vigorous development of the human space industry within the framework of the United Nations in fields like rule-making, strategic planning, carrying out space missions, as well as scientific data sharing and application.

Niklas Hedman, acting director of the UNOOSA, said that the UNOOSA is excited to see China's achievements in space in recent years. The organization plans to take the exploration efforts to another level through bilateral and multilateral partnerships.

"In the complex realm of space exploration, international cooperation will undoubtedly be the best practice for success," said Hedman. "Working together is crucial in an era when our reliance on space assets only grows stronger."

Shen Xiaoming, Party chief of Hainan, said spacecraft like the Mars probe Tianwen-1, the lunar probe Chang'e-5 and the space station core module Tianhe all blasted off from Hainan to explore the universe.

Shen noted that Hainan is striving to build a free-trade port with Chinese characteristics in line with the world's highest level of openness. As a key part of the Hainan Free Trade Port, Wenchang International Space City enjoys a good momentum of development in the aerospace industry.

More than 10 directors of space agencies from other countries will give presentations, and representatives from more than 80 countries and regions will attend the meeting online and offline.