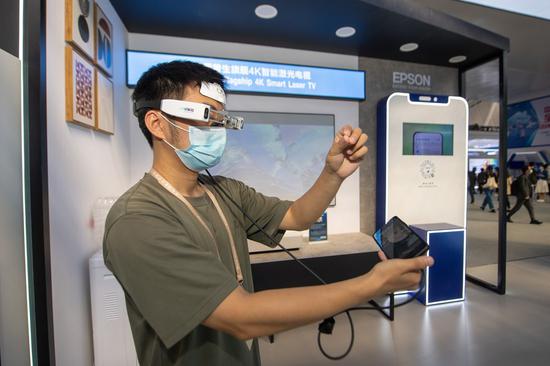 A visitor experiences a pair of AR glasses at the booth of Epson during the Light of Internet Expo in Wuzhen, east China's Zhejiang Province, Nov. 10, 2022. (Photo: Xinhua/Jiang Han)

From smart glasses to cybersecurity systems, the latest products being showcased at the ongoing 2022 World Internet Conference Wuzhen Summit have shed light on global firms' ambitions to tap into China's digital future.

Epson (China) Co., Ltd. is debuting its new BT-45CS Si-OLED binocular smart glasses in China both at the summit and at the China International Import Expo (CIIE). It is the company's first pair of smart glasses designed for industrial applications.

The glasses feature a headband-style headset with a helmet clip attachment, and could help industrial firms save on costs by rendering an augmented reality (AR) experience for remote assistance, workflow guidance and training applications. When fixing a machinery glitch, for example, a maintenance technician could use the glasses to allow an expert to share his or her vision and help solve the problem remotely.

"China's unremitting digital transformation and a series of supportive policies have provided fertile land for Epson to introduce and market the product," said Wen Junjie, AR glasses sales manager for Epson. The company consulted with many Chinese clients in the development process, Wen added.

The glasses incorporate Epson's VM 40 AR optical engine, which made its world debut at last year's World Internet Conference. It has received order inquiries from potential global clients at the summit and at this year's CIIE, Wen said.

Like Epson, many other global heavyweights, including Qualcomm, Cisco, Microsoft, Ericsson and Kaspersky, are frequent guests at the summit.

The Kaspersky Secure Remote Workspace, a security system that seeks to immunize certain hardware from virus attacks, is one of the 15 world-leading internet hi-tech achievements that were commended at the summit. The product will be marketed in China next year.

"We hope to help unleash the benefits of China's digital economy by easing market entities' concerns over cybersecurity risks," said Alvin Cheng, general manager of Kaspersky Greater China. He said Kaspersky is now working with a company in Qingdao to apply the system to Internet-of-Things gears like routers and smart fridges.

Ericsson (China) Communications Co., Ltd. has teamed up with China Mobile and Tencent Cloud to launch a system aimed at resolving lags and interruptions in real 5G scenarios, and improving the reliability and fluidity of remote control.

"Ericsson will continue to innovate to improve the reliability of time-critical communications together with Chinese operators and industry partners, contributing to the burgeoning digital economy as well as the building of a community with a shared future in cyberspace," said Fang Ying, president of Ericsson China.

China has actively promoted international cooperation in the digital economy and trade in recent years, under multilateral frameworks like the G20, Asia-Pacific Economic Cooperation and BRICS, according to the China Internet Development Report 2022, which was released at the summit. A recent outcome of such cooperation is the BRICS Digital Economy Partnership Framework, which was endorsed at the 12th Meeting of the BRICS Trade Ministers in June.

China's digital economy has witnessed remarkable development over the past decade, ranking second globally for years in terms of scale. Its value hit 45.5 trillion yuan (about 6.28 trillion U.S. dollars) in 2021, accounting for 39.8 percent of the country's GDP, official data shows.

The country has also unveiled a plan to boost the development of the virtual reality, AR and mixed reality sectors. It expects the total value of these sectors to exceed 350 billion yuan by 2026.

Representatives of World Internet Conference members, including Tesla, Qualcomm, Nokia, China Unicom and JD.com, have said that the importance of the Chinese market stands out even more against the backdrop of deepening global internet exchanges. They said they believe the industry is highly committed to win-win cooperation.