U.S. is 'largest spreader of disinformation' 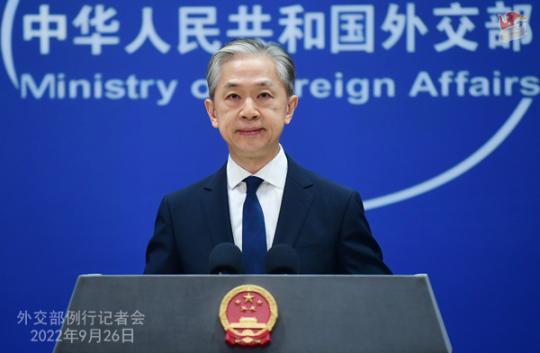 The United States is "the largest spreader of disinformation", Foreign Ministry spokesman Wang Wenbin said, adding that the disinformation it has fabricated is being seen through and rejected by more and more people.

Wang made the remark on Monday at a daily news conference when a reporter sought his comments on a report issued by the Stanford Internet Observatory in August.

The observatory said it has found in a joint investigation "an interconnected web of accounts "on social media platforms that "used deceptive tactics to promote pro-Western narratives".

"These campaigns consistently advanced narratives promoting the interests of the United States and its allies while opposing countries including Russia, China, and Iran," the observatory said.

Wang cited the report, and said, "Many U.S. media have disclosed that these fake accounts are suspected to have been managed by the U.S. military with a purpose to conduct secret information warfare."

The U.S. has fabricated and spread disinformation since the Cold War, when the Central Intelligence Agency launched Operation Mockingbird to manipulate public opinion, according to Wang.

In recent years, the country has been slandering China by claiming that "genocide" and "forced labor "exist in China's Xinjiang Uygur autonomous region, he said.

The U.S. has been "spreading disinformation to glorify aggression and interference as promoting democracy, plundering as upholding justice and devastation and killing as protecting human rights", the spokesman said.

On the other hand, the U.S., which has set up a large number of fake accounts and created anti-China narratives, has been smearing China by pushing social media platforms to ban Chinese netizens' accounts, labeling Chinese media and accusing China of "inciting anti-U.S. sentiment", Wang said.

"People of the world are clear-eyed and will not be fooled," he said. "Be it 'weapons of mass destruction' in Iraq, the 'White Helmets' in Syria or 'genocide' in Xinjiang, they have all become hallmarks for the U.S.' failing credibility," he said.

In another development, Wang confirmed on Monday that China and the Democratic People's Republic of Korea have decided to resume railway freight transport between Dandong, Liaoning province, and the DPRK city of Sinuiju.

Both sides will continue to strengthen collaboration to guarantee the safe and stable operation of the rail freight transport, Wang said.