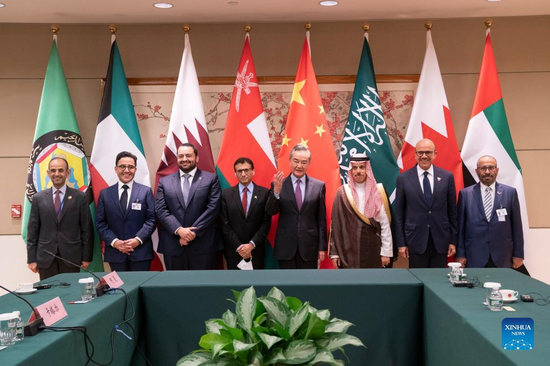 In the meeting, Wang said that with the attention and guidance of the leaders of China and the GCC, the relations between the two sides have been healthy, stable and growing in an all-round manner, and are at the forefront of China's relations with Arab countries.

Noting that China has been the largest trading partner of the GCC for a long time, Wang said last year, trade between China and the GCC increased by 44 percent against the trend, practical cooperation between the two sides in various fields are fruitful, people-to-people exchanges are becoming increasingly close, and China-GCC relations have become a model for cooperation between China and developing countries.

Wang also said that China appreciates the GCC countries for their upholding justice on issues related to Taiwan, Xinjiang, Hong Kong and human rights, as well as their understanding of and support for China's legitimate demands.

The Chinese side is ready to work with the GCC countries to defend non-interference in internal affairs, which is a basic norm governing international relations, and safeguard the common interests of developing countries, he added.

Members of the GCC said that China, which is a permanent member of the UN Security Council and an important partner of the Gulf countries, plays an important role in maintaining regional and world security and stability, and in promoting global development.

The GCC, they said, is full of expectations for the bright future of China-GCC relations, adding that it is willing to consolidate mutual trust, deepen practical cooperation in various fields, ensure food and energy security and supply chains stability, and jointly meet global challenges.

The GCC side firmly adheres to the one-China policy, supports China in safeguarding national sovereignty and territorial integrity, they said, adding that both the GCC and China uphold the principles of mutual respect and non-interference in internal affairs.

It is ready to continue strengthening communication and cooperation with China in international affairs so as to maintain peace and stability, and promote development and prosperity, they added.

Wang stressed that China fully supports a diversified economic development of GCC countries, and is willing to strengthen the synergy of the Belt and Road Initiative with the development strategies of the GCC countries, continuously deepen cooperation in energy, infrastructure, finance, investment, high technologies and other fields, expand cultural and people-to-people exchanges, and create more cooperation highlights.

China supports the GCC countries in playing a greater role in international and regional affairs, and is willing to strengthen communication and coordination with the GCC on multilateral platforms, jointly practice the true multilateralism, and work together to safeguard regional and world peace and stability, Wang added.

Both sides agreed that they should make joint efforts to reach an agreement on a free trade agreement between them at an early date, so as to send a positive signal and promote their own development.

The two sides also agreed to deepen strategic mutual trust, lift the positioning of bilateral relations, and speed up the formulation of a strategic cooperation plan for the next step. The two sides also exchanged views on the Iranian nuclear issue, the situation in Yemen and other topics.