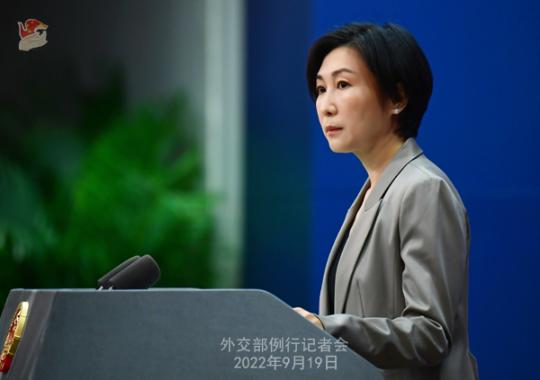 Foreign Ministry spokeswoman Mao Ning urged the United States on Monday to fully understand the extremely important and highly sensitive nature of the Taiwan question, after U.S. President Joe Biden said that the U.S. military would defend Taiwan against the mainland.

"China deplores and firmly opposes the remarks made by the U.S. president and has made stern representations with the U.S.," Mao told a daily news briefing.

Mao urged the U.S. to earnestly implement its commitment of not supporting "Taiwan independence" and prudently and properly handle Taiwan-related issues so as to avoid any further damage to China-U.S. relations and peace and stability across the Taiwan Straits.

Noting that achieving the complete reunification of the motherland is a shared aspiration and the sacred duty of all Chinese people, Mao said that China would strive for peaceful reunification with the utmost sincerity and efforts.

"But China will never tolerate any activities aiming to split the country, and reserves all options of taking necessary measures," she stressed.

Mao warned that no one should stand on the opposite side of the 1.4 billion Chinese people. "Nobody should underestimate the strong resolve, will and capability of the Chinese people to defend the nation's sovereignty and territorial integrity."

Zhu Fenglian, a spokeswoman for the Taiwan Affairs Office of the State Council, also urged Washington to abide by the one-China principle and the stipulations of the three China-U.S. joint communiques.

"There is but one China in the world and Taiwan is an inalienable part of China's territory," Zhu added.

She underlined that the one-China principle is the political foundation of China-U.S. relations, while calling for the U.S. to treat Taiwan-related issues with caution.

Zhu also delivered a stern warning to the Taiwan's Democratic Progressive Party authorities, saying that their attempt to solicit U.S. support for the "independence" agenda is doomed to fail.