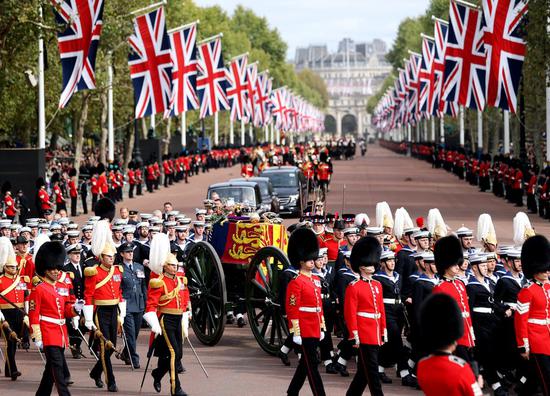 The cortege with the hearse carrying the coffin of Queen Elizabeth II travels on a road near the Buckingham Palace in London, Britain, Sept. 19, 2022.(Xinhua/Li Ying)

Britain held a state funeral for Queen Elizabeth II, the country's longest-reigning monarch, at Westminster Abbey on Monday, attended by a host of world leaders, royalty and other dignitaries.

Queen Elizabeth II died on Sept. 8, aged 96, at Balmoral in Scotland after a 70-year reign. Her eldest son, Charles, succeeded the throne.

The funeral followed a national mourning period that began on Sept. 9, which saw hundreds of thousands of people laying flowers at royal palaces across Britain and queuing for hours to see the late Queen lying in state at Westminster Hall.

"Here, where Queen Elizabeth was married and crowned, we gather from across the nation, from the Commonwealth, and from the nations of the world, to mourn our loss, to remember her long life of selfless service ..." said David Hoyle, dean of the Westminster Abbey, who led the funeral service broadcast live.

A two-minute national silence was observed in remembrance of the late Queen at the end of the state funeral.

Following the service at Westminster Abbey, the Queen's coffin will be taken to Windsor Castle where she will be buried together with her husband Prince Philip, who died last year at 99.