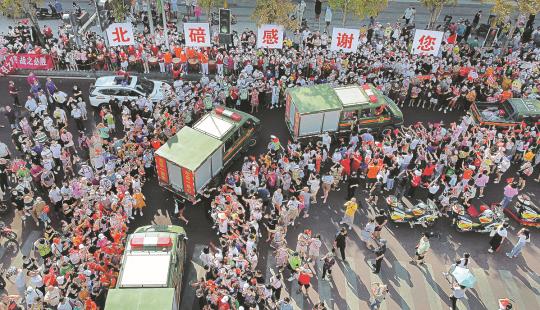 Chongqing, a city of more than 32 million people, faced an unprecedented test this summer, with a heat wave and drought causing a series of large wildfires since Aug 17.

Local residents have safeguarded their hometown in every way possible, with thousands of volunteers from all walks of life fighting the fires with professionals.

Under a scorching sun, some residents used chain saws to fell trees to make fire barriers. Others rode motorcycles on newly formed paths to take firefighters and supplies up a mountain, while some volunteers carried food and drinks on their backs by foot.

Women and children helped organize supplies and clear the ground, and performed other essential tasks.

On Thursday night, as wildfires approached a man-made barrier on Jinyun Mountain in Beibei district, a total of more than 1,000 firefighters and volunteers stood alongside the barrier with fire extinguishers. Seen from overhead, their lights formed a silver wall against the raging fire line. 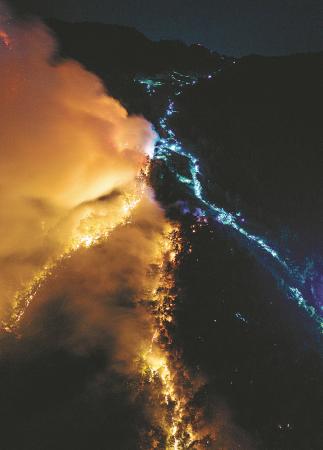 An aerial photo shows the lights of firefighters' helmets as the wildfire approaches a fire barrier in Beibei district of Chongqing on Thursday. ZHOU XUAN/FOR CHINA DAILY

The residents' stories have touched many people.

"Chongqing people are really amazing," said Du Hailang, head of the Beijing Emergency Rescue Association, an NGO founded in 2007 that has taken part in many overseas rescue operations.

Du and 10 other members of the association joined the fire rescue team in Chongqing last week.

"The man-made wall was unbelievable, but shocking. It really showed Chinese people's determination to defend their homeland," Du said.

Zou Yu, from the Chongqing Emergency Management Bureau, said at a news conference that by Friday morning, the wildfires in the city had been extinguished and efforts were being made to prevent new ones from breaking out.

He said Chongqing had witnessed several forest wildfires this summer due to the worst heat wave and drought since 1961, when such statistics were first recorded.

"The city has experienced record-high local temperatures, with those in Beibei district reaching 45 C.Temperatures in Chongqing had been above 40 C for 15 days as of Thursday. Thirty-one of the total 38 districts and counties experienced lingering heat and drought as well as low precipitation, with 70 percent less rainfall than average recorded," Zou said.

The local government set up forest fire rescue headquarters, organized local professional forces and forest fire teams from neighboring Yunnan, Gansu and Sichuan provinces, and more than 20,000 Party and government cadres, militia and volunteers to fight the fires, he added.