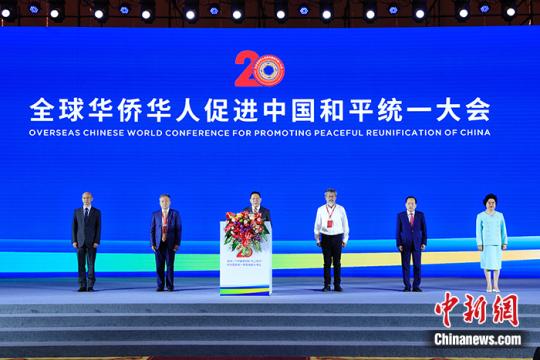 The Chengdu Declaration is adopted on Saturday evening during the Overseas Chinese World Conference for Promoting the Peaceful Reunification of China held in Chengdu, Sichuan province. (Photo/Chinanews.com)

The one-China principle cannot be challenged and China must and will surely be reunified, according to the Chengdu Declaration adopted on Saturday evening during the Overseas Chinese World Conference for Promoting the Peaceful Reunification of China held in Chengdu, Sichuan province.

The conference drew over 3,000 participants from organizations for promoting China's peaceful reunification from over 120 countries and regions.

According to the declaration, there is only one China and Taiwan is an inalienable part of China's territory, and the People's Republic of China is the sole legal government representing the whole of China. This is a universally recognized norm governing international relations and the common consensus of the international community.

The declaration strongly opposed the visit of United States Speaker of the House of Representatives Nancy Pelosi to Taiwan in early August and called on peace-loving people around the world to earnestly respect China's national sovereignty and territorial integrity, fully understand the desire to realize the country's reunification, and support the unremitting efforts of the Chinese people on both sides of the Taiwan Straits to achieve peaceful reunification on the basis of the "1992 Consensus" that embodies the one-China principle.

A history of 5,000 years proves reunification is the mainstream of Chinese history, according to the declaration.

"We sincerely hope the majority of Taiwan compatriots will fully understand that Taiwan's future lies in national reunification and its people's well-being lies in the Chinese nation's rejuvenation," it said.

As "Taiwan independence" is the biggest obstacle to China's reunification and a serious hidden danger to national rejuvenation, the declaration said it is a path leading to nowhere.