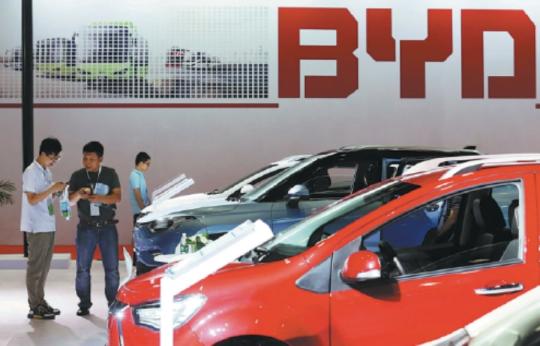 BYD's electric models attract visitors at a new energy auto expo in Beijing. (Photo by A QING / FOR CHINA DAILY)

China's new energy vehicle industry has been developing rapidly in recent years and will continue to deepen international cooperation with an open attitude to inject fresh impetus into the sustainable development of the global economy and society, Premier Li Keqiang said on Saturday.

"Our supporting policies for the NEV industry are in compliance with the international rules, and we treat NEV enterprises registered in China as equals," Li said in a congratulatory letter to the 2022 World New Energy Vehicle Congress, which was held in Beijing and Hainan province both online and offline through Sunday.

Li emphasized that as the world's largest developing country, China needs to develop extensive international cooperation, whether in coping with climate change or in promoting green and low-carbon industries.

For the long term, China has conducted exchanges and cooperation in areas such as equipment, technologies and industrial standards with countries that have a head start in the automobile industry, Li said, adding that this has made use of various complementary advantages and jointly promoted the development and upgrading of the industry.

Oliver Zipse, chairman of the management board at BMW Group, said at the conference that cooperation is needed to tackle global economic challenges, and Sino-German cooperation in the automotive sector has been mutually beneficial.

Stefan Mecha, president of Volkswagen Passenger Cars Brand for China, who also took part in the event, said that the opening-up of the Chinese market has enabled the company to acquire a majority share in its joint venture Volkswagen Anhui, which will be solely dedicated to manufacturing electric cars.

Li also pointed out in his congratulatory message that as a major automobile producer and consumer, China ranks among the top globally in its production, sales and ownership of new energy vehicles.

As China is quickly switching gears to lead the NEV sector, rising exports of NEVs are also brightening the global e-car market. Data from the association showed that carmakers in China shipped 49,000 passenger NEVs overseas in July, accounting for nearly 22 percent of total vehicle exports.

"The country has cultivated the world's largest NEV consumer group, which has injected strong impetus into global NEV development," Xin Guobin, vice-minister of industry and information technology, said at the conference.

But the development of a new industry is inseparable from a market-oriented, legalized and international business environment, not to mention that the automobile industry is a globalized industry, he said.

"More efforts will be made to create a fair and competitive market, and use market-oriented methods to promote the survival of the fittest and the development of supporting industries for original equipment manufacturers in the automobile sector," he said.