Policies to speed up recovery 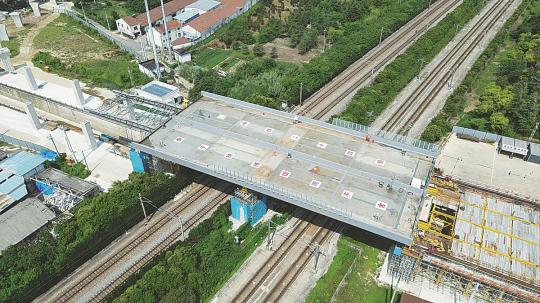 An overpass on the Benfa Road in Changzhou, Jiangsu province, rises above the Beijing-Shanghai Railway on Thursday. The bridge, built by China Railway 24th Bureau Group Corp, a unit of China Railway Construction Corp, is nearing completion. (Provided to China Daily)

Economist says additional $222b in fiscal funds will aid infrastructure

China will continue to adopt a series of incremental policies to further consolidate and accelerate its economic recovery from COVID-19 in the latter part of this year, economists said.

"It is estimated that apart from recently launched quasi-fiscal policy instruments, the Chinese government will provide additional fiscal funds worth about 1.5 trillion yuan ($222 billion) in the second half. The channels for capital replenishment include the issuance of local government special bonds, submission of increased profits of State-owned enterprises and revitalization of existing funds," said Yu Xiangrong, China chief economist at Citigroup.

Yu emphasized that infrastructure investment is becoming a strong foothold for China to stabilize growth. As traditional infrastructure is still underdeveloped and has weak links due to its unbalanced growth, industrial upgrade and transitions to cleaner, greener energy need large-scale "new infrastructure" investment.

"The government will comprehensively broaden infrastructure financing through channels like fiscal policies and policy banks. We expect that China's full-year infrastructure investment will increase by 7.7 percent year-on-year, up from 0.4 percent last year, and the growth rate will remain at around 5 percent in 2023," he said.

"We think it is likely necessary for the Political Bureau of the Communist Party of China Central Committee to revisit the government's annual fiscal stance and plan for additional bond issuances, likely in the amount of 1 to 2 trillion yuan. Policymakers should also consider additional steps to boost homebuyer confidence to avoid the risk of prolonging the housing downturn and triggering wider credit defaults," he said.

Economists with Standard Chartered Bank said they expect the Chinese government to fully implement or even overshoot this year's budget to maintain support for the economy amid continued COVID-19 disruptions and a slowing global economy.

"If the government wants to maintain spending at the budgeted level, we estimate that 2.8 trillion yuan in additional funding is needed. The government may use the surplus cash accumulated in the past or advance the 2023 local special bond issuance quota to fill the revenue shortfall," said Li Wei, senior economist at Standard Chartered Bank (China) Ltd.

Lian Ping, chief economist at Zhixin Investment and head of the Zhixin Investment Research Institute, agreed that the proactive fiscal policy will remain the main force to boost economic recovery in China in the second half.

"The majority of funds raised via the issuance of treasury bonds and local government bonds are expected to be used by the end of August. This will effectively support the implementation of major projects in China, and the impact of the nation's fiscal policy on stabilizing growth will further appear. At the beginning of the fourth quarter, China may front-load the 2023 special-purpose bond quota to satisfy continuously increasing financing needs, thus allowing macroeconomic policies to provide sustained support for growth stabilization," he said.

Because of the acceleration of government bond issuance and unleashed financing demand of businesses, China will see faster credit growth, and the liquidity of its banking system may become relatively tight for a certain period at the end of the third quarter or the beginning of the fourth quarter. As a result, the People's Bank of China, the nation's central bank, may cut the reserve requirement ratio again to meet funding needs boosted by accelerated economic growth in the second half, Lian said.

The PBOC may also lower relending rates for the agriculture sector and small businesses once more to support banks' further cuts to lending rates for micro, small and medium-sized enterprises, he said.