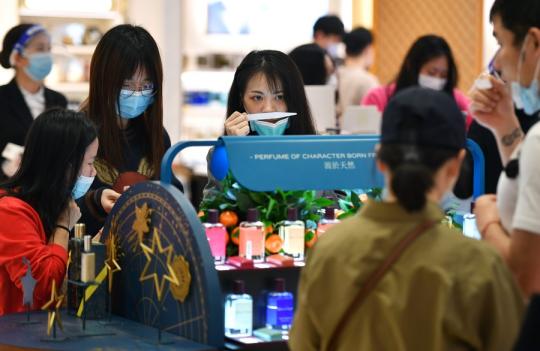 Consumption upgrades are of vital importance to China's economic recovery this year and the country's high-quality development in the long run, providing golden business opportunities for global companies to thrive in its market, participants in a high-profile expo said on Monday.

French President Emmanuel Macron said via video link at the opening ceremony of the Second China International Consumer Products Expo that France considered it a great distinction to be the guest of honor at the expo in Haikou, Hainan province.

The European nation stands as one of the leading countries participating in the expo with more than 200 brands.

Trade between France and China is vibrant, and the two sides have been cooperating closely in such sectors as agriculture, healthcare, electronic products and luxury products, Macron said.

The French president stressed that as China is building Hainan into an international free trade port and making it a new international hub for high-quality products, French enterprises will fully support the plan and hope to contribute to its success.

This year, the expo has drawn the participation of over 2,800 brands from 61 countries and regions. More than 600 new products are making their debut on the global stage at the expo, which runs until Saturday.

Consulting and financial company Deloitte, a two-time participant in the event, said the expo will serve as an important platform to help promote the building of Hainan into an international tourism consumption center and a market platform of high-quality consumer goods.

Leung Chun-ying, vice-chairman of the National Committee of the Chinese People's Political Consultative Conference, said during the opening ceremony that despite the COVID-19 pandemic restraining the recovery of the global consumption market, the overall trend of consumption upgrades in China remains unchanged, and the nation's consumption scale is expanding.

Li Mingxing, a member of the 13th National Committee of the CPPCC and vice-chairman of the China Enterprise Confederation, said China's imports of consumer goods continue to increase strongly despite the pandemic, and will contribute to the stable recovery of the world's second-largest economy.

China's consumer market is second only to that of the United States. Last year, the total import value of consumer goods in China reached 1.73 trillion yuan ($256.4 billion), up 9.9 percent year-on-year, according to the Ministry of Commerce.

On Monday, French luxury goods company LVMH Group signed a memorandum of cooperation with the local government of Haikou. The company will officially launch its perfume and cosmetics tourism retail supply chain center in China at the comprehensive bonded area of Haikou.