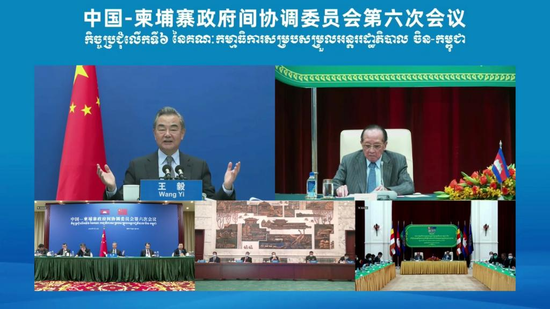 Next year will mark the 65th anniversary of the establishment of diplomatic ties between China and Cambodia and the completion of the two countries' first five-year action plan for building a community with a shared future. Noting this, Wang confirmed that China is willing to work with Cambodia to push bilateral cooperation at the forefront of the times, better serve the development of their respective countries and contribute to regional development and prosperity.

The facts show that the building of a China-Cambodia community with a shared future serves the fundamental and long-term interests of the two nations, and conforms to the trend of progress of the times and to the overall interest for peace and stability in the region. This cooperation is moving in the right direction, Wang said. The two sides are writing a new chapter in the high-quality development of bilateral relations in the new era, Wang adds.

Hor said Cambodia firmly adheres to the one-China policy, firmly supports the Global Development Initiative and the Global Security Initiative, and wishes the upcoming 20th National Congress of the CPC a complete success.

Cambodia and China have made remarkable progress in fully implementing their plan of action for building a community with a shared future for both countries. Hor thanked China for providing a large amount of vaccines and anti-epidemic supplies, guaranteeing that Cambodia will be able to effectively control the epidemic and improve its economic situation.

"The Cambodian side is firmly committed to building a Cambodia-China community with a shared future and consolidating our ironclad friendship so as to bring more benefits to the two countries and their citizens," Hor added.

The two sides reviewed the implementation of the consensus reached at the fifth meeting of the China-Cambodia intergovernmental coordinating committee and made plans for the next step of their cooperation.

The two sides formulated a new action plan on building a China-Cambodia community with a shared future and coordinated exchanges and cooperation in various fields.

The two sides will deepen the exchange in governing their respective countries, and firmly support each other in safeguarding core interests and taking the development path in line with their national conditions.

The two sides will promote the joint construction of key projects of the Belt and Road Initiative with a high standard, continue to fight the epidemic together, and develop their cooperation in the fields of economy, trade and agriculture.

The two sides will increase flights between the two countries, implement livelihood projects, and strengthen cooperation in science and technology, education, culture, think tanks and tourism.

The two sides will adhere to the ASEAN-led regional cooperation architecture and reject any attempt to turn the East Asian cooperation platform into an arena for major powers to engage in game playing.

After the meeting, the two sides jointly announced the signing of cooperation documents on human resources and infrastructure.