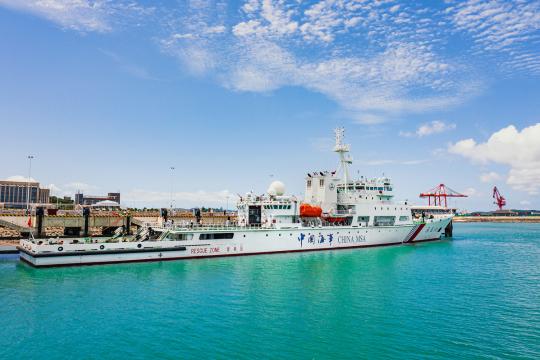 The Haixun 06, the largest maritime patrol ship in the Taiwan Straits, was commissioned on Monday in Fuzhou, the capital of Fujian province, according to the Fujian Maritime Safety Administration.

The administration said the Haixun 06, or Sea Patrol 06, is the first large patrol/rescue vessel in the Straits and also the most advanced ship operated by the administration. It is tasked with conducting law-enforcement patrols, monitoring maritime traffic, responding to emergencies, and searching for and rescuing ships and crew, as well as extinguishing fires and handling pollution.

The ship is expected to play an important role in ensuring the transportation of strategic materials and the safety of crucial waterways, boosting maritime business in Fujian and building a strong marine economy in China, the administration said.

At a commissioning ceremony in Fuzhou's Pingtan county on Monday, which was China's 18th National Maritime Day, Xu Zengfu, director of the administration, said the new ship's service was a milestone in his administration's hardware modernization and indicated that the agency has become capable of enforcing laws on the open sea.

Xu also said that, including the Haixun 06, the administration now has 60 patrol ships.

Designed by the China Ship Development and Design Center in Wuhan, a subsidiary of China Shipbuilding Industry Corp, the Haixun 06 is 128 meters long, 16 meters wide and has a full-load displacement of 6,600 metric tons. Its maximum speed is about 23 knots, or about 43 kilometers per hour. The ship is able to operate for as long as 60 days without any resupply and travel more than 18,500 km in a single voyage.

The vessel is capable of sailing against strong waves and gales. It can accommodate up to 200 people rescued from ships in distress and provide them with simple medical treatment, the designers said.

It is equipped with GPS and China's Beidou Navigation Satellite System, boasting a good capacity for data collection and processing.

The ship can carry a medium-duty helicopter, which will improve its effectiveness in search and rescue operations, according to the designers.

Liang Shiqing, general manager of the shipbuilder, said at the ceremony that his company has built patrol ships since the 1980s and has constructed more than 50 such vessels for Chinese maritime authorities.