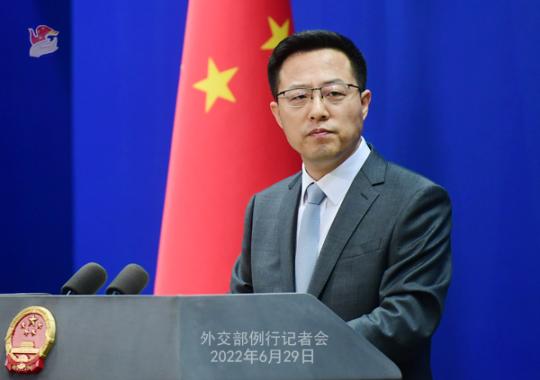 China on Wednesday urged the G7 to stop attacking and smearing the country, and interfering in its internal affairs in any form, after the group released a communique making accusations about Beijing.

At a news briefing, Foreign Ministry spokesman Zhao Lijian criticized G7 nations for exploiting the communique to clamor over the narrative of democracy versus authoritarianism in a bid to stoke confrontation.

The G7 leaders wrapped up their summit in Germany on Tuesday with a communique referring to China 14 times and making irresponsible remarks on China's internal affairs including the Hong Kong Special Administrative Region, the Xinjiang Uygur autonomous region, and peace and stability across the Taiwan Straits.

"It speaks volumes that the G7 has no intention to conduct dialogue and cooperation on the basis of respect and equality," Zhao said.

He denounced the G7 for engaging in bloc politics underpinned by interests of small circles, saying the group clings to a Cold War mentality and ideological biases.

Noting G7 countries only make up around 10 percent of the world's population, Zhao said, "They have no right to represent the world or to think their values and standards should apply to the world.

"Hong Kong affairs are purely China's internal affairs," Zhao said, adding that the democratic rights and freedom legitimately enjoyed by the people of Hong Kong have been fully guaranteed since Hong Kong's return to the motherland in 1997.

Saying these countries themselves have a poor track record of human rights, Zhao added they are not qualified to assume the role of human rights "lecturers", still less to use human rights as a tool to meddle in the domestic affairs of other countries.

"The hype by these countries on issues related to Xinjiang and the Tibet autonomous region will only make the world see clearly their hegemonic nature and hypocrisy," Zhao added.

On the Taiwan question, Zhao pointed out moves by the Taiwan authorities to promote "Taiwan independence" separatist activities, and the actions by the United States and a handful of Western countries trying to "use Taiwan to contain China" are the biggest threats to peace and stability across the Taiwan Straits.

"Taiwan is a part of China," Ma Xiaoguang, a spokesman for the Taiwan Affairs Office of the State Council, said at a news conference in Beijing. "The Taiwan question is purely China's internal affair and brooks no interference from foreign countries.

"To achieve their aims, Western countries have turned a blind eye to provocations made by Taiwan's Democratic Progressive Party authority and 'Taiwan independence' separatist forces to realize 'independence'," Ma said.

"Instead, they accuse the mainland of being the destroyer of peace and stability in the Straits," Ma said. "This is a complete distortion of facts, and a confusion of right and wrong."

Yet at a critical time for the international community that is fighting the pandemic and striving for economic recovery, Zhao slammed the G7 for being "keen to create divisions and confrontations", saying they showed "no sense of responsibility or morality".