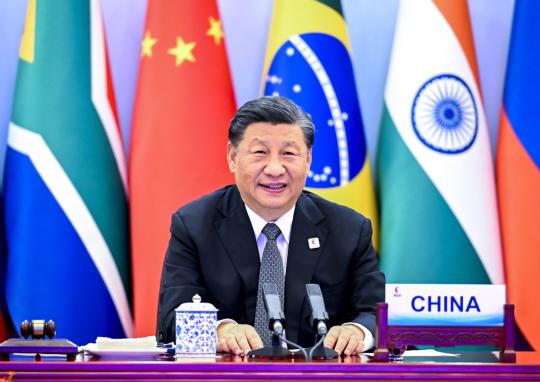 President Xi Jinping has urged the BRICS countries to support one another on issues concerning their core interests, practice true multilateralism, and work together to safeguard justice, fairness and solidarity and reject hegemony, bullying and division.

Saying that the world today is overshadowed by the dark clouds of Cold War mentality and power politics and beset by constantly emerging traditional and nontraditional security threats, Xi called on the BRICS countries to uphold solidarity and safeguard world peace and tranquillity.

"Some countries attempt to expand military alliances to seek absolute security, stoke bloc-based confrontation by coercing other countries into picking sides, and pursue unilateral dominance at the expense of others' rights and interests. If such dangerous trends are allowed to continue, the world will witness even more turbulence and insecurity," he said.

Xi said that BRICS countries need to act with a sense of responsibility to bring positive, stabilizing and constructive strength to the world.

He underlined the need to reject Cold War mentality and bloc confrontation, oppose unilateral sanctions and abuse of sanctions, and reject hegemony's small circles by forming one big family belonging to a community with a shared future for mankind.

China is willing to work with BRICS partners to operationalize the Global Security Initiative, which advocates a vision of common, comprehensive, cooperative and sustainable security, and bring more stability and positive energy to the world, Xi said.

Noting that the combination of the COVID-19 pandemic and the Ukraine crisis has resulted in disruptions to global industrial and supply chains, sustained increases in commodity prices and weaker international monetary and financial systems, Xi underlined the need for the BRICS countries to strengthen cooperation to boost development and jointly tackle risks and challenges.

He called for enhancing international cooperation on the COVID-19 response, pooling strength for economic recovery, stepping up macro policy coordination and keeping industrial and supply chains secure and unclogged.

China stands ready to work with BRICS partners to add more substance to the Global Development Initiative, which aims to re-energize the implementation of the United Nations' 2030 Agenda for Sustainable Development, and contribute to stronger, greener and healthier global development, Xi said.

He criticized some countries that seek to create monopolies, blockades and barriers in science and technology in order to disrupt others' innovation and development and hold on to their dominant position, saying their attempts are doomed to fail. 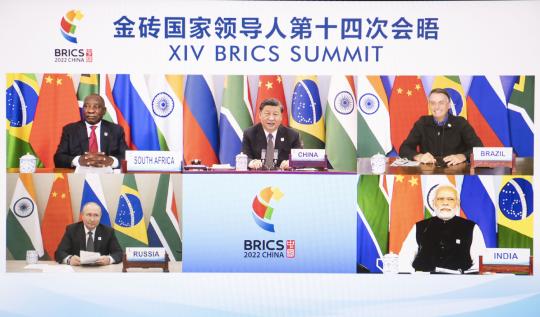 While stressing the need to build an open world economy, Xi also emphasized the importance of forestalling and defusing major risks and challenges in global development and working for more inclusive and resilient economic growth.

He underlined the importance of developing the "BRICS Plus" cooperation approach, and called for advancing this process to allow like-minded partners to become part of the BRICS family at an early date.

The summit, with the theme "Fostering High-quality Partnership and Ushering in a New Era of Global Development", came at a time when the world is facing the continued spread of COVID-19, tortuous global economic recovery and increasingly salient peace and security issues.

The leaders exchanged views on BRICS cooperation in various fields as well as other major issues of common concern and reached broad consensus. They agreed that BRICS countries should uphold multilateralism, advance the democratization of global governance and safeguard international fairness and justice, in order to inject stability and positive energy into the volatile international situation.

While agreeing to bolster cooperation in various areas, including the COVID-19 response, they pledged to firmly uphold the multilateral trading system, advance the building of an open world economy and oppose unilateral sanctions and "long-arm jurisdiction".

The summit adopted a declaration to build a stronger BRICS partnership.

While addressing the summit, Bolsonaro voiced his hope that the BRICS nations will have a greater role in key international organizations at a time when emerging economies and developing countries are accounting for an increasing proportion of the global economy.

Putin said that some countries currently follow erroneous economic policies, and they are making other countries pay the price for their mistakes. The BRICS nations need to bolster unity and make a greater joint effort to tackle difficulties, he added.

Modi, noting that COVID-19 has had a huge impact on the global community, said the BRICS nations face similar challenges, and their stronger collaboration will make a key contribution to the world's recovery from the pandemic.

Ramaphosa said that the five BRICS nations represent the world's emerging economies, and they should seize the opportunity to boost collaboration. He noted that, as China holds the BRICS chairmanship this year, the group has held its first high-level meeting on climate change and made global development more inclusive and sustainable.