President Xi Jinping has praised Ta Kung Pao, known as the oldest Chinese-language newspaper still in circulation in the world, for its role in serving the country and maintaining prosperity and stability in the Hong Kong Special Administrative Region, urging it to write a new chapter for national rejuvenation in the new era.

Xi, who is also general secretary of the Communist Party of China Central Committee and chairman of the Central Military Commission, made the remark in a congratulatory message sent on Sunday to an event marking the 120th anniversary of the founding of the newspaper. The event was held in Hong Kong, where the newspaper has its headquarters. 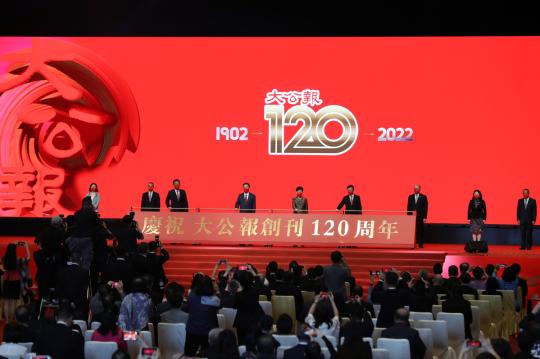 An event is held in Hong Kong on Sunday, June 12, 2022 to mark the 120th anniversary of the founding of Ta Kung Pao, known as the oldest Chinese-language newspaper still in circulation in the world. (Photo/Xinhua)

Xi extended warm congratulations to the entire staff of the newspaper on the anniversary, saying that over the past century and more, Ta Kung Pao has been upholding its founding purpose of seeking the greater good for the public and serving the country with articles.

It has played a positive role in promoting the construction of New China, the nation's reform and opening-up and modernization, as well as contributing to Hong Kong's return to the motherland and maintaining the region's prosperity and stability, he said.

In the new era, Xi said that the newspaper has voiced clear positive messages to build up consensus in society, and made contributions to safeguarding the social stability of Hong Kong, enhancing exchanges between Hong Kong and the mainland and inspiring people's love for Hong Kong and the motherland.

He expressed his hope that the newspaper would bear in mind its founding mission, carry on the patriotic traditions, pursue innovative development and keep expanding its influence in order to write even more splendid chapters to the steady and sustained implementation of "one country, two systems" in Hong Kong.

Speaking at the event, Luo Huining, director of the Liaison Office of the Central People's Government in the Hong Kong SAR, said Xi's congratulatory message will certainly inject strong willpower into Hong Kong as it is at the critical juncture of maintaining stability and seeking prosperity.

Chief Executive-designate John Lee Ka-chiu expressed confidence in the newspaper, a witness of the ups and downs of the country and the city, to continue to capture the successful implementation of "one country, two systems" in the city objectively, fairly and in an unbiased manner.