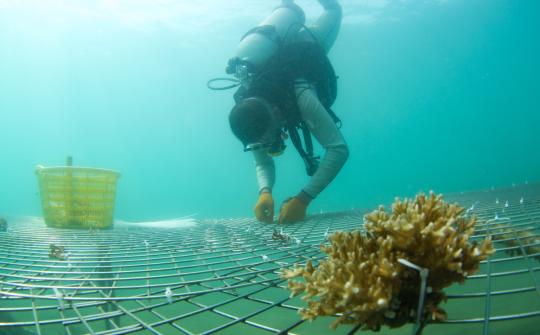 A researcher places coral on an artificial habitat in Yazhou Bay, Sanya, Hainan province, in March of 2021. （Photo/Xinhua）

China continues to improve the quality of its seawater, as efforts to enhance the management of sewage outlets that open into the sea have been boosted, according to a recent bulletin on the country's marine environment, which was unveiled by the Ministry of Ecology and Environment ahead of World Oceans Day, which falls on Wednesday.

About 97.7 percent of the country's seawater sampled was listed as having Grade I water, the top tier in the national four-tier quality system, last year, an increase of 0.9 percentage points from a year earlier.

The document also noted a continuous decrease in areas with seawater below Grade IV, the lowest level, and increasingly clean coastal waters.

Seawater quality is ranked as "fairly good" if it is at or above Grade II.

"Though showing up in the sea, marine ecological and environmental problems have their sources on land," she noted, adding that in general, rivers emptying into the sea last year were found to contain only mild levels of pollution.

In a move to further enhance control, the State Council, China's Cabinet, unveiled a guideline dedicated to the management of sewage outlets in March, vowing to locate and supervise every sewer that empties into the sea and watercourses in major river basins by the end of 2025.

Wang also noted that compared to some other parts of the world, the density of trash and microplastics in the seas off China is at a low to medium level.

Monitoring by the center last year showed that plastic waste accounted for 92.9 percent of floating rubbish. In terms of the trash found on beaches and on the seabed, 75.9 percent and 83.3 percent were plastic, respectively.

On average, 0.44 pieces of microplastic were found per cubic meter of seawater sampled, Wang added.

China began to include marine waste in regular marine monitoring work in 2007 and launched microplastic monitoring in 2016.

To comprehensively determine the distribution of plastic waste and microplastics in coastal waters, Wang said, China has begun monitoring key estuaries and bays, and established a marine waste monitoring network in all prefecture-level coastal cities.

The ministry plans to gradually expand the network to all coastal county-level cities, she continued.

Aside from pollution control, China has also intensified efforts to conserve fish resources, with an annual fishing moratorium imposed in coastal waters during the peak season since 1995.

In 2020, that moratorium was extended to Chinese vessels in the Atlantic and the East Pacific, and on May 25 of this year, the Ministry of Agriculture and Rural Affairs announced that China will unilaterally observe a trial high-seas fishing moratorium in the northern Indian Ocean from July 1 to Sept 30.

The existing high seas moratorium and the trial this year mean that all areas and fish species not managed by international or regional fishery organizations will be subject to the moratorium.