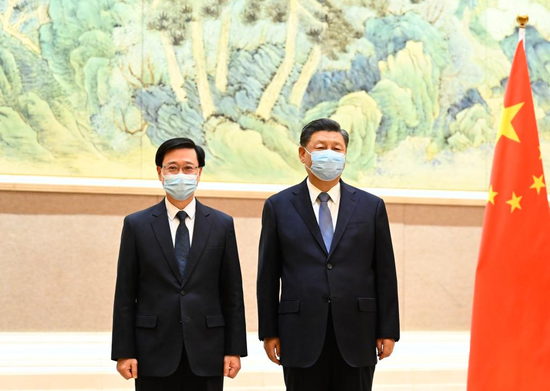 Special: 25th Anniversary of Hong Kong's Return to The Motherland

Lee, who won the chief executive election on May 8, will assume office on July 1, 2022.

Xi congratulated Lee on his election win and appointment by the central government.

Praising Lee for maintaining the unwavering stance of loving the country and the HKSAR, being willing to assume responsibilities and actively performing his duties, Xi said Lee has made contributions to safeguarding national security and Hong Kong's prosperity and stability in various roles.

"The central authorities give full affirmation to you and have full trust in you," Xi told Lee.

Under the new electoral system, the HKSAR has successfully held elections of the Election Committee, the seventh-term Legislative Council and the sixth-term chief executive since last year.

It has been proved that the new electoral system played a decisive role in implementing the principle of "patriots administering Hong Kong," ensuring the position of Hong Kong people as their own masters, and facilitating a good environment in which all sectors of society work together for Hong Kong's development, Xi said.

"This is a political and democratic system that is in line with the 'one country, two systems' principle and suited to Hong Kong's realities and needs for development," Xi said. "It must be cherished and upheld for a long time to come."

This year marks the 25th anniversary of Hong Kong's return to the motherland.

"Despite challenges over the past 25 years, the practice of 'one country, two systems' in Hong Kong has been a resounding success," Xi said.

"The central authorities' resolve to fully and faithfully implement the principle of 'one country, two systems' has never wavered, still less will it change," he said.

Thanks to the concerted efforts of the central government, the HKSAR government and the whole society, Hong Kong has achieved a major transition from chaos to order and is now at a crucial stage of advancing to prosperity, Xi noted.

He said he believes that the new HKSAR government will bring new changes and Hong Kong will make new advances in its development.