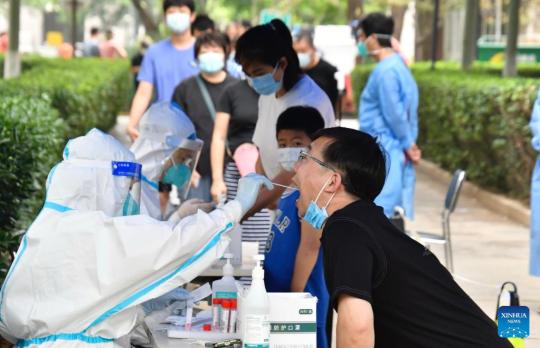 A medical worker takes a swab sample from a resident for nucleic acid testing at Balizhuang subdistrict in Chaoyang district, Beijing, June 11, 2022. (Photo/Xinhua)

Beijing has continued to report new COVID-19 cases at the community level in recent days, which has added to the uncertainty during the current complicated epidemic control and prevention situation, a senior official said on Wednesday.

The three new cases found on Wednesday were all discovered via mass nucleic acid tests at communities in the Beijing Economic-Technological Development Area, or Beijing E-Town, he said.

One of the new cases is an 8-year-old primary school student living in a residential community in Beijing E-Town. The other three people who live with the child had taken nucleic acid tests twice on Wednesday and all results have been negative.

The other two cases both work in Beijing E-Town. The area is conducting three days of successive mass nucleic acid tests for all its residents starting on Wednesday.

On Wednesday, Universal Beijing Resort announced that it will gradually resume operations this weekend after a nearly two-month suspension due to the city's COVID-19 outbreak.

According to a plan released by the company, the resort will strictly control guest flow and strengthen epidemic control and prevention measures.

In the early stages, some venues or entertainment experiences will remain closed. They will reopen as appropriate, depending on the pandemic and related requirements.

Previously, the city, with a population of nearly 10 million, had been testing every five days or weekly. The city reported its last new locally transmitted case on April 24.