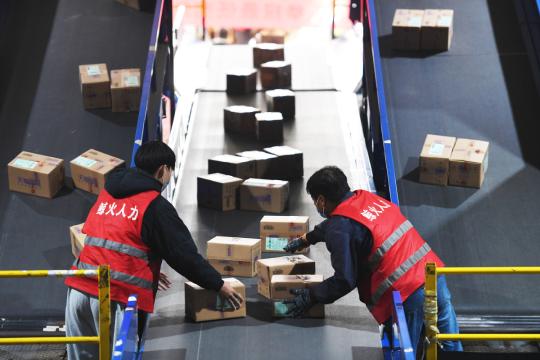 China is taking solid steps to accelerate the building of a unified domestic market that is efficient, rules-based, open and encourages fair competition amid headwinds and pressures from a complicated and grim external environment and resurgent domestic COVID-19 cases.

Experts said this marked the country's latest move to deepen market-oriented reforms and inject more dynamism into market entities, which will propel the sustainable growth of both domestic and foreign businesses.

In order to build a strong and unified domestic market, they said it is essential for the country to remove market entry barriers for companies at home and abroad, build a high-standard market system and promote both internal and external economic circulation.

The Communist Party of China Central Committee and the State Council jointly released a guideline on accelerating the establishment of a unified domestic market on Sunday.

Liu Quanhong, director of the International Economics Research Institute of the Chinese Academy of Macroeconomic Research, said the new guideline will give full play to the advantages of China's ultra-large domestic market.

Citing the key moves mapped out by the document, such as implementing a unified market access system and developing a unified domestic market of productivity factors and resources, Liu said such measures will help relax market access for both domestic and foreign businesses, promote fair competition and enhance the predictability and stability of its market regulation.

Under the guideline, the country will take steps to implement a unified negative list for market access in all regions, strengthen the anti-monopoly drive, punish enterprises engaging in unfair competition in accordance with the law, and eliminate local protectionism and barriers between regional markets.

Liu said such measures will also help create a better business environment for all market entities and remove institutional obstacles that hinder the market-based allocation of productivity factors and the flow of goods and services.

Building a unified domestic market will help solve the problems faced by micro, small and medium-sized foreign trade enterprises such as rising costs and increasing risks in international markets, he said.

"It will boost the connectivity between domestic and international markets, and promote the free, orderly, safe and convenient flow of factors across borders," Liu said.

"For market players, including foreign businesses, it will allow them to accelerate the push for developing new businesses in international markets and expand economic and trade cooperation globally."

Cui Weijie, deputy director of the Chinese Academy of International Trade and Economic Cooperation, said the new guideline provides an action plan for the construction of a unified national market, which will speed up the establishment of a unified national market system and rules, promote industrial upgrading, remove barriers hindering economic circulation for both domestic and foreign enterprises and drive dual-circulation economic development.

Bai Wenxi, chief economist at IPG China, said that amid intensified geopolitical uncertainties, rising commodity prices and a weak real estate sector, the new guideline is of great significance in building a fair and efficient market, stabilizing the economy and driving sustainable development.

"While establishing and improving rules that are conducive to the operation of market mechanisms, the country will remove policies and systems hindering smooth economic circulation," he said.

"This will significantly boost market confidence, especially for foreign businesses."

With the help of the government's effective measures to deliver national treatment for foreign businesses and expand opening-up on a larger scale and at a deeper level, Bai said foreign investors will benefit greatly from their involvement in the Chinese market.

Bill Liu, vice-president of sales and general manager of China Business at Western Digital, a US-based data storage solution provider, is upbeat about China's future growth prospects, saying the company is optimistic about the great potential of the digital consumption market under the dual-circulation strategy.

"For Western Digital, China is a strategic market with great importance and historical investments," Liu said.