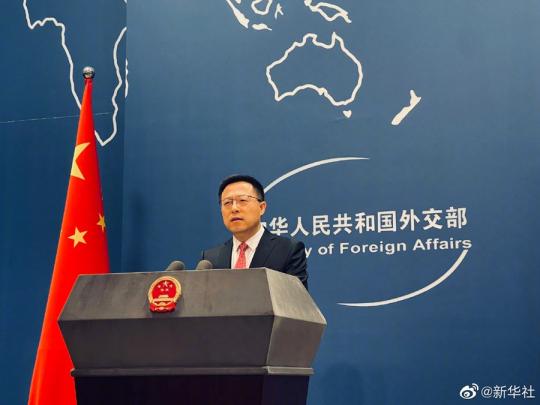 China will resort to firm and forceful measures if Speaker of the U.S. House of Representatives Nancy Pelosi visits Taiwan, and the United States will be held accountable for all the consequences that follow, Foreign Ministry spokesman Zhao Lijian said on Thursday.

Neither Pelosi's office nor authorities in Taiwan have confirmed that the visit would take place, but some media organizations in Japan and Taiwan reported she would do so after she visits Japan this weekend, according to Reuters.

China has made solemn representations to the U.S. over the possible visit, which, if it happens, would "seriously violate the one-China principle and the three China-U.S. joint communiques, seriously undermine China's sovereignty and territorial integrity, and seriously impact the political foundation of China-U.S. relations", Zhao said at a daily news conference.

The visit would also send an erroneous message to "Taiwan independence" separatist forces, Zhao said, and he urged the U.S. to cancel it immediately.

Ma Xiaoguang, spokesman for the Taiwan Affairs Office of the State Council, said on Thursday that China would not tolerate such a visit and would "strike back firmly" if it takes place.

In another development, the Foreign Ministry spokesman said on Thursday that to purposely compare the two fundamentally different topics of the Taiwan question and the Ukraine crisis is "playing with fire" and that those who are doing so "will surely burn themselves".

Responding to threats voiced on Wednesday by U.S. Treasury Secretary Janet Yellen and Deputy Secretary of State Wendy Sherman, Zhao said how China addresses the Taiwan question, something left unsolved by the Chinese civil war, is its own domestic affair and that no other countries have any right to interfere.

"We will work for the prospect of a peaceful reunification with the utmost sincerity and utmost efforts," Zhao said. "But we reserve the option of taking all necessary measures, which are targeted at intervention by foreign forces and the very few 'Taiwan independence' separatists."

The root cause of the current tensions across the Taiwan Straits is that the authorities in Taiwan have kept attempting to seek "Taiwan independence" by relying on the U.S., while some in the U.S. want to use Taiwan to contain China, Zhao said.

Also on Thursday, the Ministry of National Defense expressed resolute opposition to the U.S. approving a $95 million missile support package to Taiwan.

Senior Colonel Tan Kefei, a spokesman for the ministry, said the People's Liberation Army will take firm actions to thwart any foreign interference and secession ploy by Taiwan separatists, and safeguard national sovereignty and territorial integrity.

Zhang Zhihaocontributed to this story.