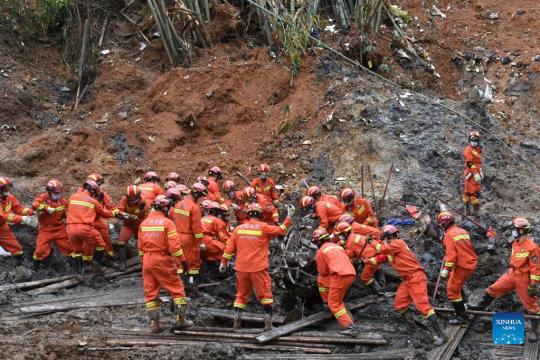 Recovery workers have not yet found the second black box of the China Eastern Airlines jet that crashed on Monday in Guangxi Zhuang autonomous region, according to the rescue headquarters.

Civil Aviation Administration of China News reported on Friday morning that the flight data recorder, the second of the two black boxes installed on the Boeing 737-800 aircraft, was recovered from the crash site near the village of Molang, Tengxian county of Guangxi Zhuang autonomous region.

Currently, search teams are still making the best efforts to recover the flight data recorder of the aircraft, according to the report.

FDR stores important data such as flight path, speed, altitude and engine power, which can reveal whether human error or instrument problems could have contributed to the crash.

The flight recorders, also known as black boxes, offer vital clues about plane crashes. The cockpit voice recorder was found on Wednesday near the impact point of the crash. It has been sent to a laboratory in Beijing for decoding and analysis.

Flight MU5735 left Kunming, the capital of Yunnan province, at 1:11 pm on Monday and was scheduled to arrive in Guangzhou, Guangdong province, at 3:05 pm. Air traffic controllers lost track of the plane over Wuzhou at 2:21 pm.