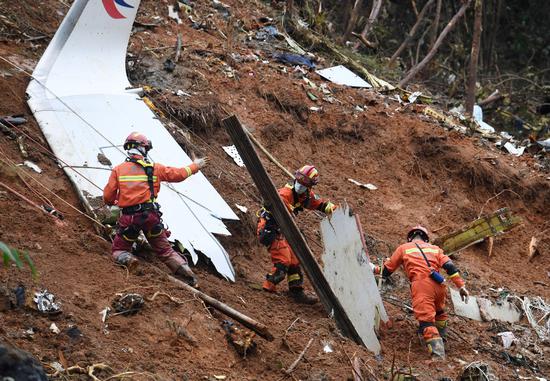 A recovery team searches through the debris at the China Eastern Airlines Flight MU5735 crash site on Thursday in Tengxian county, Guangxi Zhuang autonomous region. Various items from the cockpit have been found, including crew manuals and ID cards. (LU BOAN/XINHUA)

The main impact point where the China Eastern Airlines jet crashed on Monday in the Guangxi Zhuang autonomous region was identified and the search area was further enlarged amid heavy rain and landslides on Thursday.

Most of the debris from the aircraft is scattered in the core area, a 30-meter radius around the main point of impact, Zhu Tao, head of the Civil Aviation Administration of China's aviation safety office, said at a news conference in Wuzhou, Guangxi, on Thursday afternoon.

"Some of the debris was about 20 meters underground. The search and rescue teams have recovered parts of the engine blades, horizontal tail and wings. Also recovered was debris from the cockpit, including crew manuals and identity cards and a rope for the crew to escape from the cockpit in an emergency," Zhu said.

Flight MU5735 left Kunming, the capital of Yunnan province, at 1:11 pm Monday and was scheduled to arrive in Guangzhou, Guangdong province, at 3:05 pm. Air traffic controllers lost track of the plane over Wuzhou at 2:21 pm.

Zheng Xi, head of the Guangxi Fire and Rescue Brigade, said the search area on Thursday was about 1.5 times that of Wednesday. "By 4 pm, we had found 21 items of passengers' belongings and 183 pieces of aircraft debris. Also, some victims' remains were found."

Zheng added that a piece of what is thought to be aircraft debris was also found 10 kilometers from the main crash site near the village of Molang, Tengxian county.

Heavy rain hampered the search for a second straight day, but the searchers continued to use life sensors and metal detectors to comb through the heavily forested, steep slopes amid occasional small landslides, Zheng said.

Meanwhile, Chinese investigators are working on decoding the information in the cockpit voice recorder, which was found at the crash site on Wednesday. They hope it will shed a light on the cause of the crash, which civil aviation accident experts have described as of a "rarely seen" nature, Zhu said.

According to flight data, the aircraft was cruising in good weather conditions and suddenly began dropping sharply at high speed.

In accordance with international agreements, Zhu said, the CAAC has shared the basic crash information with the International Civil Aviation Organization and the US National Transportation Safety Board, the investigative authority of the country where the aircraft was manufactured.

"Our key task now is still to conduct search and rescue operations and collect evidence for a preliminary investigation. We will invite relevant parties to join us when the case enters the stage of accident investigation, in accordance with international agreements," Zhu said.

Information that China Eastern had made repairs on the "pickle forks"－which connect the wings and fuselage－of its Boeing 737-800 fleet has raised questions.

The 737-800 is part of Boeing's 737 NG(Next Generation) series. In late 2019, that series made global headlines when the US Federal Aviation Administration ordered dozens of Boeing 737s that had seen heavy use to undergo safety inspections because of cracking in the "pickle fork".

Liu Xiaodong, head of the airlines' publicity department said the suspicion is unfounded because the aircraft wasn't due for "pickle fork" repairs.

"The 6.8-year-old aircraft doesn't meet the requirement for 'pickle fork' repairs, which are required after 22,600 takeoffs and landings, so it isn't an issue," Liu said.