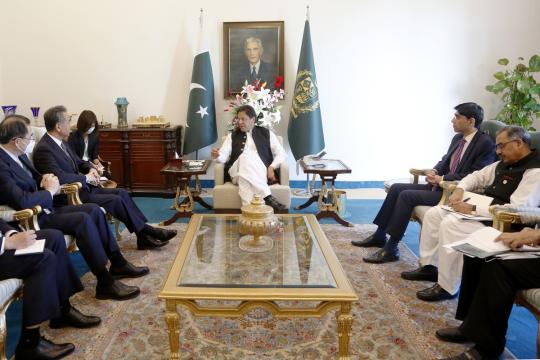 China and Pakistan have voiced their joint support for facilitating peace talks between Russia and Ukraine to ease tensions, saying Ukraine should serve as a bridge for communication between the East and West instead of the forefront of major countries competing with each other.

State Councilor and Foreign Minister Wang Yi and Pakistani Prime Minister Imran Khan made the statement on Tuesday when they met in Islamabad on the sidelines of the 48th session of the Council of Foreign Ministers of the Organisation of Islamic Cooperation.

During their meeting, they urged preventing the Ukraine crisis from spreading.

The United States, Europe and NATO should develop dialogue with Russia and adhere to the principle of unified security to build a balanced, effective and sustainable security architecture so Europe can avert war and other regions and countries will not be affected, they said.

Wang and the Pakistani prime minister spoke highly of the strategic significance of bilateral ties, agreeing that amid the volatile international landscape, China and Pakistan should further strengthen solidarity and coordination and continue to contribute to stability in the region and the world at large.

Wang was in Islamabad to attend the meeting of the foreign ministers of the Organisation of Islamic Cooperation.

It was the first time a Chinese foreign minister participated in such a meeting, which demonstrated China's and the Islamic world's sincerity in working to enhance exchanges and cooperation, Wang said.

On the sidelines of the meeting, Wang also met separately on Tuesday with, among others, Egyptian Foreign Minister Sameh Shoukry and Saudi Arabia's Foreign Minister Faisal bin Farhan Al Saud. They exchanged views about the Ukraine crisis.

Wang and Shoukry both expressed their commitment to addressing the Ukraine crisis with comprehensive resolutions. They said that the sovereignty and territorial integrity of all countries should be respected.

Shoukry said Egypt opposes some countries putting pressure on China and it maintains that countries should strengthen cooperation rather than escalate conflict.

Both foreign ministers considered preventing the humanitarian crisis, maintaining the peace talk process and staying committed to resolving the conflict through dialogue and negotiation as the pressing tasks now.

They also stressed that every country has the right to have its own views about the issue, and they rejected any external pressure and refused to accept simple black-and-white logic.