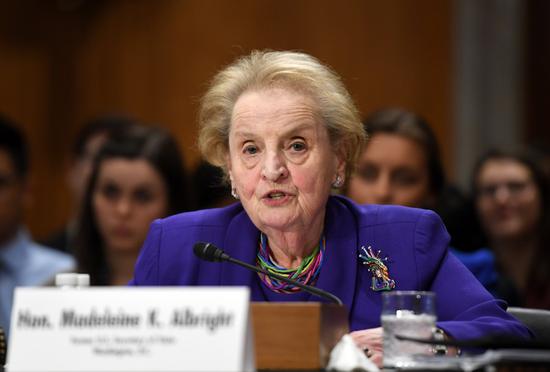 Former U.S. Secretary of State Madeleine Albright testifies before the Senate Foreign Relations Committee during a hearing at Capitol Hill in Washington D.C., the United States, on March 30, 2017. (Xinhua/Bao Dandan)

Madeleine Albright, the first female secretary of state of the United States, died Wednesday, her family announced. She was 84.

Albright died of cancer, her family said in a statement, adding she was "surrounded by family and friends" during the final moment of her life.

A native of Prague, then Czechoslovakia, Albright migrated to the United States in 1948 as an 11-year-old refugee, rising to the top of U.S. Foreign Service as she held the post of secretary of state from 1997 to 2001 during the Bill Clinton administration.

During her tenure at the State Department, Albright championed the eastward expansion of the North Atlantic Treaty Organization (NATO), pushing in particular for the alliance's military intervention -- led by the United States in 1999 -- into the conflict in Kosovo between the Serbs and ethnic Albanians.

NATO's 78-day airstrike campaign against then Federal Republic of Yugoslavia extended to the bombardment of the capital city of Belgrade.

Before becoming the secretary of state, Albright was the U.S. ambassador to the United Nations between 1993 and 1997. She was a professor at Georgetown University's School of Foreign Service at the time of her death.