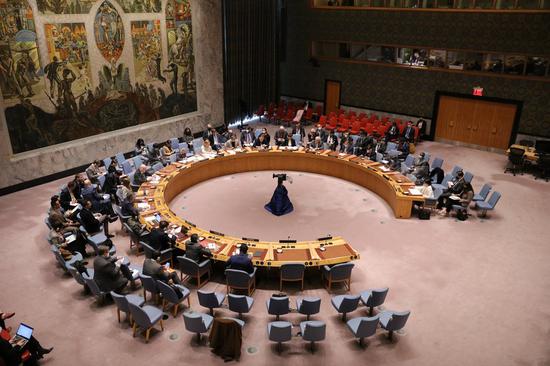 Photo taken on March 18, 2022 shows a Security Council meeting on the biological security issue in Ukraine at the UN headquarters in New York. (Xinhua/Xie E)

The 15-member UN Security Council on Wednesday failed to adopt a resolution on the humanitarian situation in Ukraine.

Two members (Russia and China) voted in favor of the text and 13 others abstained. The text submitted by Russia was rejected.

A Security Council resolution needs at least nine votes in favor and no vetoes by Russia, China, Britain, France or the United States to be adopted.

Russia's draft resolution expresses grave concern about reports of civilian casualties and the deteriorating humanitarian situation in and around Ukraine, including the growing number of internally displaced persons and refugees. The draft text also calls for the protection of civilians, including humanitarian and medical personnel, respect for international law and the protection of civilian objects and critical infrastructure, safe and unhindered evacuation of all civilians, and unhindered humanitarian access in Ukraine.

The council has held three briefings on the humanitarian situation in Ukraine since the conflict erupted, respectively on Feb. 28, March 7 and March 17.