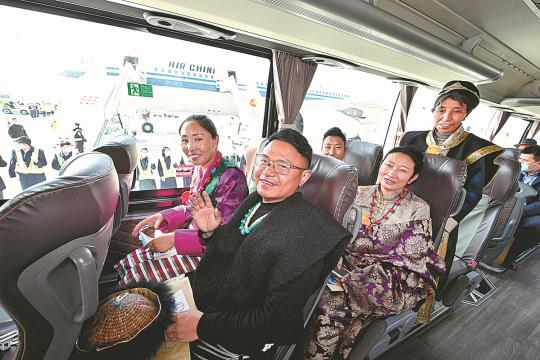 National legislators from the Tibet autonomous region board a bus headed to their accommodation sites on Thursday after arriving in Beijing for the fifth session of the 13th National People's Congress, China's top legislature. Thursday also marked Tibetan New Year. (Photo by Tentsen Shinden/Tibet Daily)

Democracy is not the privilege of certain countries, and the United States is using the name of democracy to serve its own interests and divide the world, Guo Weimin, spokesman for the fifth session of the 13th National Committee of the Chinese People's Political Consultative Conference, said on Thursday.

Guo made the remarks while commenting on claims that China and the US are competing for the power of discourse on democracy, as China had issued a white paper on democracy in December, days before the US held the so-called Summit for Democracy.

He said at a news conference that the US held the summit at a time when it was beset with contradictions at home and its own democracy was being criticized, so the meeting was nothing more than an effort to suppress others, divide the world and maintain its hegemony.

"Democracy has diverse forms and is not exclusive to a few countries. The democratic system of each country should be chosen by the people of the country according to their own national conditions. What's suitable is the best," Guo said at the news conference on the annual session of the National Committee of the CPPCC, China's top political advisory body. 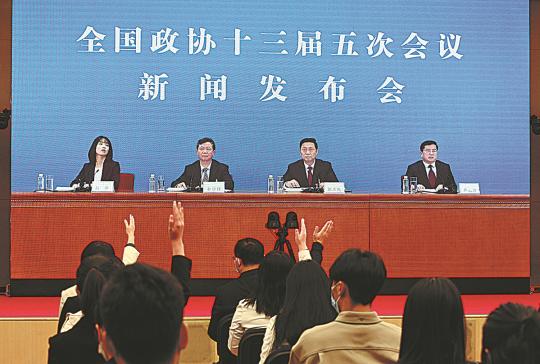 Journalists raise their hands for questions on Thursday at a news conference for the fifth session of the 13th National Committee of the Chinese People's Political Consultative Conference in Beijing. [Photo by Jia Ning/For China Daily]

"The US usurps the banner of democracy to serve its own interests, which the people of the world have seen clearly."

Guo said that some Western countries, with their own people increasingly dissatisfied with their chaotic social governance, tried to impose their so-called democratic model on other countries through "color revolutions", causing serious disasters.

Guo said China has formed a democratic political system with Chinese characteristics during its long-term development and construction.

"We've carried out democratic elections, consultations, decision-making, management and supervision in accordance with the law, blazing a path of developing whole-process people's democracy," he said.

A five-year plan for democratic oversight was also launched last year, in which the 10 special committees under the CPPCC National Committee follow the implementation of the 14th Five-Year Plan (2021-25) from different perspectives, and conduct consultative supervision with the authorities to ensure that major decisions are implemented, he added.