Getting ready for Beijing 2022 Winter Paralympics 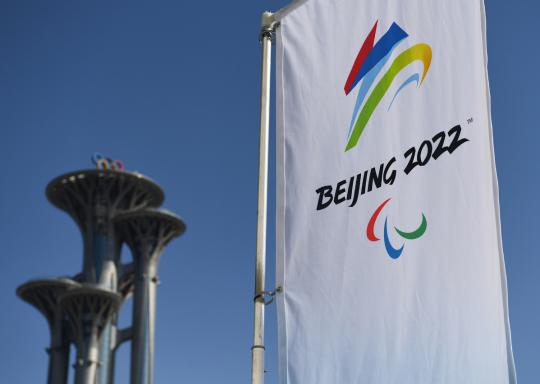 Within one week, the cauldron will be lit at the opening ceremony of the Beijing 2022 Winter Paralympic Games. Beijing, the city that hosted the 2008 Paralympics, will once again become the center stage of the Paralympic movement as the Winter Games is going to be held from March 4 to 13.

After the closing of the Beijing 2022 Olympic Winter Games, the venues have officially entered the transition stage to better serve the Beijing 2022 Winter Paralympic Games, including the famous National Aquatics Center.

Known as the "Water Cube" previously, the National Aquatics Center was converted to the "Ice Cube" to host curling competitions at the Beijing 2022 Winter Olympics. Now, more adjustments will be made to prepare for the upcoming wheelchair curling competitions.

The red lantern-shaped Paralympic mascot Shuey Rhon Rhon now replaced animated astronaut giant panda Bing Dwen Dwen in and out of the "Ice Cube". More accessible seats and toilets have been built and will be kept permanently after the events. Accessible ramps were set up not only for athletes and referees but also for the journalists with disabilities at the media stand.

If those journalists entered the main media center (MMC), they would notice a multimedia center set up at the entrance to offer guidance. Accessible signs and ramps were added to the building, even the cafeterias have been equipped with lower hand disinfection areas.

With over 80 athletes from 22 countries and regions competing at Zhangjiakou Genting Snow Park, four barrier-free routes are set up for athletes, coaches, media and audiences to guarantee an all-around barrier-free experience for all participants. Artificial limb and wheelchair maintenance center is also ready to provide timely service.

At the National Alpine Skiing Center in Yanqing district, specially-designed cable cars will cater to the needs of athletes with lower limb deficiencies. According to Netherlands coach Nicky Elsewaerd, the facilities here and of the Yanqing Paralympic Village are the best.

"I have been to Sochi and Pyeongchang, and these facilities by far are the best for the Paralympics," said Elsewaerd at the training.

"The facilities are perfect. Everything is good and acceptable. We have big rooms and big bedrooms. They have special bedrooms for athletes with wheelchairs," he added.

The whole team didn't take a single day off during the 55 days including the past Chinese New Year. "I will try my best to achieve a satisfactory result. I hope that all athletes can get honors," said Guo Yujie, who will compete in both cross-country skiing and biathlon.

A satisfactory result at home is something every Chinese athlete longed for during their preparation for the Beijing 2022 Winter Paralympic Games.

On the second day of the Year of the Tiger, the Chinese wheelchair curling team started their first training session in the lunar new year. It's hard not to notice one banner on the wall in their training venue: "The champions in Pyeongchang made history, start from zero, we gear up for Beijing".

The team made a breakthrough at the PyeongChang Winter Paralympics, snatching China's first gold medal in wheelchair curling, which is also the first-ever medal for the country at the Paralympic Games.

Team members expressed their will to turn pressure into motivation to play their best in Beijing. The reigning champion is expected to participate in the official training on March 3.