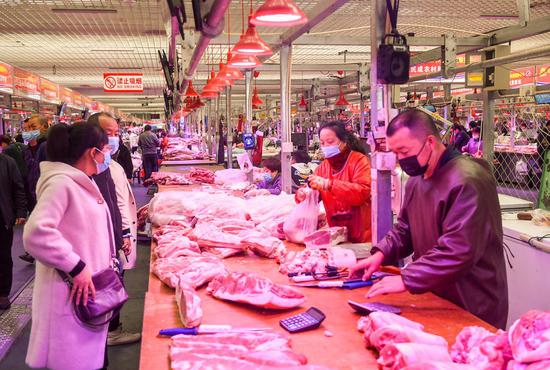 The index, the national average of pork prices against grain prices, came in at 4.98 to 1 between Feb 21 and 25, falling below the warning level of 5 to 1, said the National Development and Reform Commission.

According to a work plan for stabilizing the pork market, China has introduced a three-level early-warning system to raise the alarm for excessive ups and downs in hog prices.

The commission said it would work with relevant authorities to immediately start the stockpiling work for state reserves and guide local governments to purchase pork.

Stockpiling work has begun in provincial-level regions, including Beijing, Jiangxi, Hubei, and Chongqing. Other areas will start the work soon, according to the commission.

Livestock farms and households are advised to make reasonable decisions for production and operation to maintain the stability of hog production capacity.