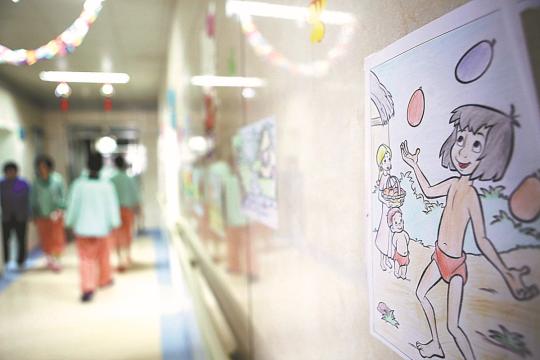 He Fan's clinic at a Beijing hospital isn't large and is sparsely furnished with an office desk and two chairs, and a glass partition that separates an adjoining room.

On a Wednesday morning late last month in this simple working environment, He, a psychiatric expert in child depression, attended to more than 40 patients with different types of mental health or behavioral issues. The patients' ages ranged from 5 to 18.

On the child psychiatric ward she is in charge of at Beijing Anding Hospital, Capital Medical University, vacant beds are a rarity. Those that are available are occupied mainly by children with severe mental disorders who have inflicted serious injuries on themselves, or who have suicidal tendencies.

In October, China's first nationwide epidemiological survey on the mental health of schoolchildren was published in the Journal of Child Psychology and Psychiatry. The survey showed that among schoolchildren age 6 to 16, the overall prevalence of mental disorders had reached 17.5 percent, a record high.

The survey also found that 3 percent of nearly 74,000 schoolchildren under the age of 17 had depressive disorders, with prevalence increasing with age.

According to the National Health Commission, in 2019, only 2.1 percent of people of all ages in China had depression.

As the incidence of mental disorders increases among schoolchildren, clinicians such as He feel the problem needs more attention.

When children became silent, fractious, or their scores at school fall sharply, there is now an increased awareness among Chinese parents that their offspring may have psychological problems.

Compared with adults, mental disorders in children and adolescents are more atypical, adding to difficulties in early detection and diagnosis.

"When children are depressed, they show this by losing their temper, becoming irritable, and constantly saying they are annoyed－conditions that are different from adults' symptoms, but which are all too easily ignored," Zheng said.

"Such children can suddenly feel that they no longer want to live," Zheng said.

In He's consulting room, the parents of Ma Junchen (not his real name) were anxious as they made their first visit to the clinic on that Wednesday morning last month.

The mother talked about the boy's abnormal behavior, which included becoming distracted in class, beating classmates, and knocking on his bed at night.

"We don't know what happened. His teacher kept telling us so many things about our son at school," the mother said, her voice trembling. "We thought there must be something wrong."

The boy said he usually stayed in class alone after his classmates had left, adding, "I felt annoyed at such times."

Under the impression that his parents had brought him to the clinic for an eye test, he said he thought he had no friends at school, and each classmate he encountered might make him agitated and provoke thoughts of violence.

His parents stared anxiously at He after the consultation, awaiting her response. The doctor advised them to first calm down, before adding that their son needed a complete physical examination and assessment.

When children first develop depression and anxiety, the symptoms are easily ignored by parents, who feel that if the children's learning is not affected, their offspring will not experience mental health issues, according to He.

"They might just think their kids are naughty and disobedient," added He, director of the child mental disorder department at Beijing Anding Hospital.

When children don't get along well with their classmates and are unable to attend school regularly, it means their social functions are impaired, He said.

"When this stage is reached, it's too late to see a doctor at the hospital, and the children's symptoms may become severe,"

He said, adding that it would be hard for parents to accept their child's mental state in such a short time.