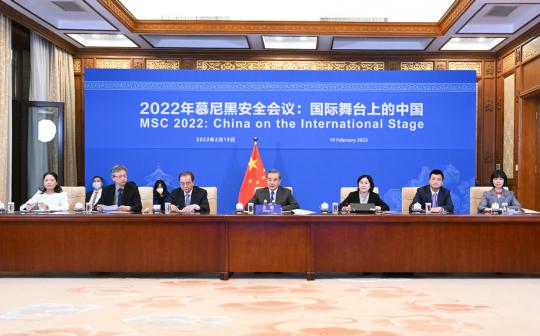 China called on countries to shoulder their responsibilities and strive for peace rather than escalate tension, create panic and even hype up wars on the Ukraine issue.

State Councilor and Foreign Minister Wang Yi made the remark via video to the 58th Munich Security Conference, where he said Ukraine should serve as a communication bridge between the East and West, instead of the frontier of a confrontation of powers.

Wang said countries needed to reject the idea of exclusive security and absolute security, as well as guard against and oppose any attempt for a "new Cold War".

China always holds that all countries' sovereignty, independence and territorial integrity should be respected and safeguarded, and Ukraine is no exception to the principle, Wang stressed. He added that Russia's reasonable security concerns should be given respect and emphasis.

Wang reiterated that the parties concerned should come back to the Minsk II agreement of 2015, which he said was the only way to solve the Ukraine issue.

As a product of the Cold War that has long gone, the North Atlantic Treaty Organization needs some necessary adjustments, he said and called into question whether the bloc's eastward enlargement is conducive to long-term European peace and stability.

The three-day conference, which concluded on Sunday, was convened amid the plethora of current crises and the significant risk of further escalation. Wolfgang Ischinger, chairman of the Munich Security Conference, called on everyone to collectively unlearn and overcome helplessness.

United Nations Secretary-General Antonio Guterres warned against the risk of geopolitical divides and urged "leaders to back a surge in diplomacy for peace, a surge in political will for peace, and a surge in investment in peace" at the meeting.

Noting that the world faces once again the danger of division and confrontation, including the revival of Cold War mentality and undermining of the international rule of law by a certain major power, Wang said such phenomena run counter to the advancement of history and "should not be allowed to continue".

To overcome the current challenges and usher in a bright future, Wang said, "the answer lies in greater solidarity and cooperation under the banner of multilateralism", highlighting critical roles and actions of major countries.

Wang called for countries to champion and act on true multilateralism, saying the authority of the United Nations must be guaranteed and the purposes and principles of the UN Charter must be upheld.

Countries need to work together for a new type of international relations based on mutual respect, equity, justice and win-win cooperation, Wang said, opposing state-to-state relations being simplistically defined by competition only and forging rivaling alliances.

Cui Hongjian, director of the European studies department at the China Institute of International Studies, said China's position on the Ukraine issue came at a very critical moment and was of great significance.

It added to the confidence and strength of the parties concerned to seek a political and diplomatic settlement of the Ukraine issue, he said. As two major forces and great civilizations, China and Europe have a good foundation of cooperation and extensive common interests, Cui said.

"China is unwilling to see Europe get mired in geopolitical conflicts, supports European strategic autonomy and hopes Europe will take regional fate into its own hands," he added.

Zhang Shengjun, deputy dean of the school of international relations at Beijing Normal University, said the United States instigated geopolitical conflicts on the Ukraine issue for self-gain, and such irresponsible behavior was the cause of the current instability and insecurity.

In the annual conference on international security policy with the Ukraine issue taking center stage, Zhang hailed China's responsible role as a major country for advocating solving disputes through dialogue and consultation rather than creating division and confrontation.