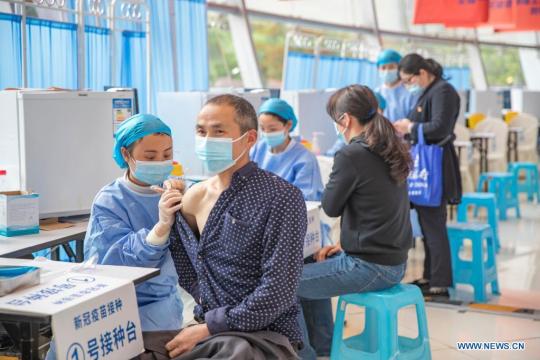 China began delivering COVID-19 booster shots over the weekend based on technologies different from those used in initial inoculations in the country, in an effort to reinforce herd immunity against the disease.

The method, known as sequential immunization, targets people over 18 years old who are fully vaccinated with one of the three inactivated vaccines produced by Sinopharm and Sinovac Biotech, according to the National Health Commission. Two shots are required for full vaccination.

Instead of receiving an additional shot developed with the same technology, which has been standard practice in the country since October, people eligible for a booster now have wider choices. They can get a protein subunit COVID-19 vaccine made by Anhui Zhifei Longcom Biopharmaceutical or a viral vector vaccine from CanSino Biologics.

Protein subunit vaccines use a subunit of virus antigen to trigger an immune response, and viral vector vaccines use a modified version of a different virus to instruct our cells to fight the virus, according to Chinese researchers.

"Research has shown that boosters of both the same and different technologies are effective at further improving protection against the disease," Wu Liangyou, deputy director of the commission's Bureau of Disease Prevention and Control, said at a briefing on Saturday. "The public only needs to select one of them."

As of Friday, more than 1.23 billion people, or roughly 87 percent of the country's total population, are fully vaccinated on the Chinese mainland, commission data show.

However, the ongoing pandemic and the threat of emerging variants have stoked concerns about waning immunity over time.

Shao Yiming, a member of the country's vaccine development expert panel, said sequential immunization is often rolled out when dealing with tricky and quickly mutating viruses.

"This method is favored for combining advantages of different vaccines and preventing people at risk of experiencing side effects for one particular kind of vaccine from going through them again," he said.

"It is a new tool to advance the establishment of herd immunity and make the immunity barrier sturdier and last longer," he said, adding that the approach has proved to be safe and effective based on domestic and foreign studies.

In addition to upgrading its vaccination strategy, Shao said China has ramped up research into vaccines tailored to tackle the Omicron variant, which has become the dominant strain around the globe.

The country's top drug regulator has received or is reviewing clinical trial applications for several new vaccines, including inactivated vaccines targeting the new strain and broad-spectrum vaccines designed to ward off multiple variants.

"Authorities have also formulated research and appraisal guidelines for such variant-specific vaccines to advance the process," he said. "Even a new variant can entirely evade immunity triggered by existing vaccines; however, we're able to scale up production of new vaccines swiftly," he said.

China reported 101 locally transmitted infections on Saturday, including 65 cases in the Inner Mongolia autonomous region and 16 in Jiangsu province.

Wu said the outbreak in Inner Mongolia is the Delta variant. The outbreak is at an early stage and the risk of it spreading further is high.

The infection cluster in Suzhou, Jiangsu, is the Omicron variant and the situation is quickly developing. Epidemiological investigation and mass screening are underway to curb transmission, he added.